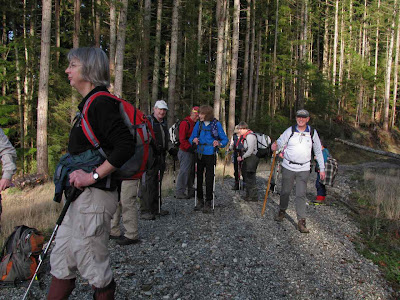 Yesterday, 16 Senior Trailblazers headed up to what we usually call "Cub Creek" from the north shore of Lake Whatcom here in Bellingham. But since the day dawned crisp, clear, and without a trace of snow, we decided to try a hike up higher than we usually do, and more challenging. Last year we were turned back on Stewart Mountain much earlier because of snow, but since Bellingham tied the record for the warmest January EVER last month, we had no snow and abundant sunshine. 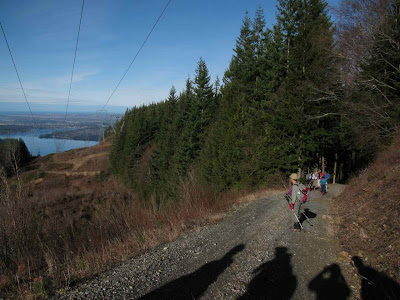 About half the hike was on trail and half on road as in these pictures (click on any to enlarge). We started at 400 feet and ended up at 3,100 feet, but the aggregate uphill (and downhill) we accomplished was almost 3,000 feet, covering just under 12 miles. This was grueling for me, because the uphill was mostly quite steep, and the downhill very hard on the joints, even using the trekking poles. We also passed under power lines, which buzzed and hummed, and in this picture you can see the power lines and the long shadows from the February sun. 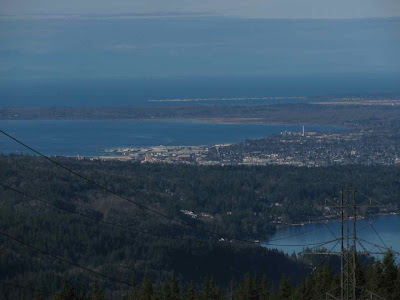 As we gained altitude, we got some really glorious views. In the foreground you can see power lines, with Lake Whatcom in the lower right, and Bellingham Bay in the middle of the picture. Looking to the southwest, we could see the area where we hiked last Thursday, in Anacortes, with the Olympics in the far background. However, the real excitement came from our views of the Twin Sisters and Mt. Baker, which I have now seen from just about every side. This was taken from the south summit of Stewart Mountain, Baker on the left and the Sisters on the right. 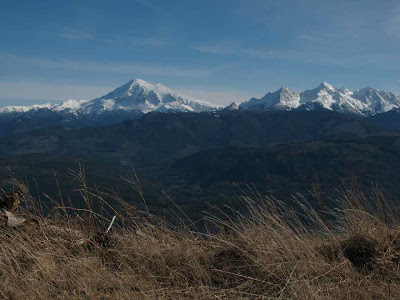 The area where we hiked has a fair amount of clear cut, using the trees for logging purposes and leaving behind rather unsightly piles of detritus and denuded hilltops. Although I have tried to keep those pictures out of view, it's impossible as I show you our lunch spot, high atop the south summit. 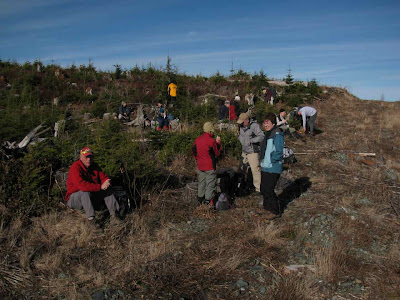 It was a little cold from the wind, but the temperature, if not balmy, was very mild for the first week in February. After lunch, we were all happy to make our way back down to the trailhead, tired, sore, and feeling like we accomplished quite a lot for a bunch of old geezers and geezettes. If you enlarge this last picture, you can clearly see the denuded hillside directly in front of us. Although these might seem annoying, I am still so thrilled that I have (1) a wonderful place to hike every week, (2) a great bunch of people to hike with, and (3) the physical ability to still keep on trekkin'! 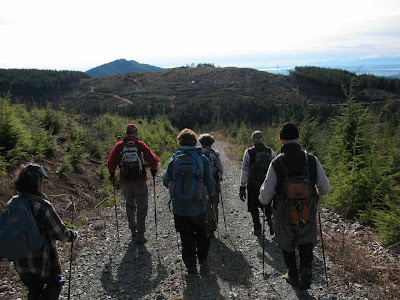