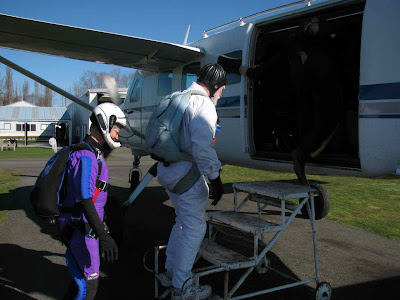 Yes, three! We arrived at the Drop Zone right around 11:00am, to find Linny already there and organizing the first jump of the day. In this picture, Smart Guy and I are boarding the plane, a sweet little Cessna Caravan that takes us up two miles above the earth, with Puget Sound in one direction, the Olympic Mountains and Mt. Baker in other directions, all of which were clear as a bell on that first jump. It was a bit chilly on the ride up, but heck, it is February after all!

Once we landed, Linny and I went to pack our parachutes quick as we could, so we could make what we thought would be our second and last jump of the day, since Linny had to leave for work by 3:00pm. The jump was so much fun and after we landed and started to pack, Linny came running over to me (it was 1:45pm) asking if I could pack quickly so we might make yet another jump! 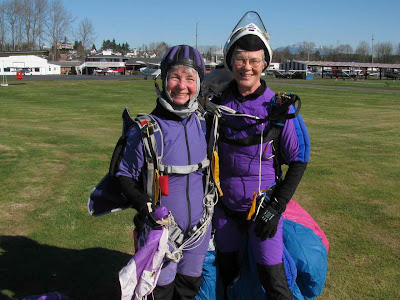 I did a quick but thorough pack job and up we went at 2:30pm, landing right at 3:00! We managed to say a few goodbyes and there was Linny, running like crazy at 3:20pm to make it to her job (she's an usher in Seattle for some major venue). Linny is five years younger than me, has more than 3,000 skydives, almost all of them at the Snohomish Drop Zone, and is called the "Queen Mother" -- she has never arrived at the Drop Zone in all these years without having baked a goody that everybody enjoys until it's gone. She organizes skydives,  and she never fails to give the pilot a dollar bill when we get ready to take off. She says she will take it back if the pilot scares her; otherwise it's theirs to keep. There's nobody quite like her, and I love to see my cellphone ring with a call from Linny telling me to get myself and my equipment to the DZ: the weather's great! My day was, well, perfect.
:-)
Posted by DJan at 5:11 PM