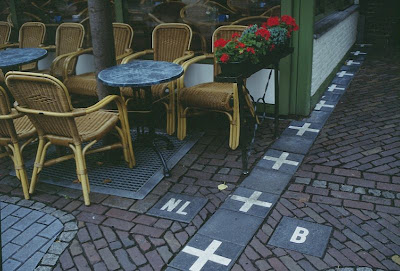 As many people will be heading to Canada next week for the Winter Olympics, I was thinking about border crossings. Here in northern Washington, going across in Canada is pretty easy, but sometimes getting back across into the United States is not so straightforward. Now you need a passport.

But there ARE countries where border crossings are not so hard. This picture shows the border between the Netherlands and Belgium. Although it's usually known as Holland, I learned that the Netherlands are made up 12 provinces, two of which are North and South Holland, and the people are also known as "Dutch." From that Wikipedia link:


The word "Dutch" is used to refer to the people, the language, and anything pertaining to the Netherlands. This lexical difference between the noun and the adjective is a peculiarity of the English language and does not exist in the Dutch language. The adjective "Dutch" is derived from the language that was spoken in the area, called "Diets," which equals Middle Dutch.

Now that's a very complicated way to describe a country, isn't it? Three different names, but a very civilized border crossing between two countries. I sure wish it could be like this everywhere.
:-)
Posted by DJan at 2:24 PM