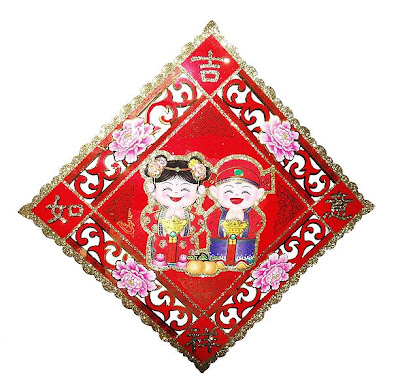 Did you know that Valentine's Day and the Chinese New Year are both this Sunday, February 14? Yes, it's a coincidence that doesn't happen very often. The Chinese New Year usually falls on the second new moon after the winter solstice. This picture is from a traditional Chinese New Year's greeting, and I thought that showing a happy couple seemed very appropriate.

This will be the Year of the Tiger, following the Year of the Ox. I happened to be in China during the festivities once, and that's when I realized that the whole country comes to a halt for a week! And every other minute we were treated to (1) a banquet, or (2) a parade with paper dragons. It did make it difficult to get around, but we had our trusty Chinese guide to help us. Qian (that's his name) was indispensable because there are so many important traditions, and we didn't want to offend.

On New Year's Eve, everyone cleans their house from top to bottom, and cleans and re-arranges their household altar, in order to sweep all the old away and make room for the new. Nobody is supposed to sweep or clean on New Year's Day, because then you would be sweeping away all the luck for your coming year.

And it all comes to a close (the festivities, I mean) on the day of the Chinese Lantern Festival, which falls on February 28 this year. So let's clean house and get ready to receive lots of Good Luck!
:-)
Posted by DJan at 2:27 PM