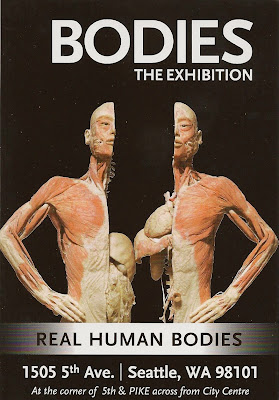 Today Smart Guy and I joined 32 others for a Senior Center outing to Seattle and this: Bodies: The Exhibition. I don't know if you know much about it, but these are actual bodies that were prepared using a process called polymer preservation. From a book I bought about the exhibit:


In this process, tissue water is first removed by submersion in acetone. Then the acetone, too, is removed in a vacuum chamber. During this step in the process, known as impregnation, the tissue spaces within the specimen, formerly filled with acetone, become filled instead with liquid silicone rubber. Lastly, during a step called curing, the silicone rubber is treated with a catalyst and hardened. The end product is a rubberized specimen that can be easily examined without any chance of it deteriorating due to the natural decay that otherwise would have rendered it unfit for study or public view.

This is an amazing exhibit. I had heard that the bodies were of Chinese prisoners, so the first question I asked of one of the roaming white-coated staff was where the bodies were obtained. I found that, contrary to the rumors, these bodies had been Chinese citizens whose bodies were unclaimed and had died a natural death. She told me none of them had shown any signs of having died any other way, except for a few that had signs of disease, which we saw: healthy lungs versus a smoker' lungs, cirrhotic livers, breast cancer.

In many cases we saw the entire body preserved as in the picture above, from head to toe, with parts removed in order to see inside. Although it sounds really gross, it wasn't at all; instead, it was beautiful to see how elegant and complex our bodies really are. We first went to the Seattle Cheesecake Factory for lunch (beforehand!) and after seeing the exhibit, we were all picked up outside by our huge bus to head home to Bellingham. 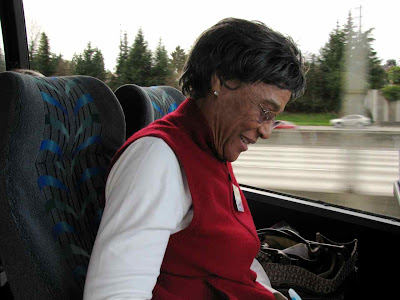 Our wonderful escort from the Senior Center, Bernyce, was a pleasure to have around shepherding us from place to place. In my opinion, this is definitely the way to experience Seattle: no drive, no parking, and zero hassle once we were there. If you get a chance to see this exhibit, or if you already have, I'd love to know what YOU thought of it.
:-)
Posted by DJan at 4:53 PM