Well, the season is coming! Tomorrow I'm heading up to Snohomish to enjoy my first skydive of the decade, unless it's too cold and I chicken out. It should be in the low to middle 50s on the ground, which means it will be (brrrr!) cold at altitude and in the airplane. 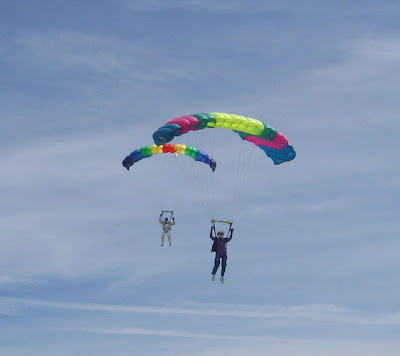 This is a picture of Smart Guy and me coming in to land at Harvey Field in Snohomish after a skydive last summer. It was much warmer that day than it will be tomorrow, but I thought I'd like to show you our pretty canopies, both a brand called Stiletto. They used to be state of the art, and nowadays they are considered to be older technology, but they're still hot!

My need and desire to skydive has diminished considerably over the years, but I still get a great deal of enjoyment from the activity, especially when I have friends who smile at me in freefall and, after we land, come over to enjoy the grins and smiles from our activity in the air. There's nothing like it. Now I'm not trying to convince anybody to do this, but if you do get a chance to make a tandem jump, you might get hooked, like I did. After all, I was 47 when I made my first jump, and I'm still at it twenty years later. Not making very many, but after more than 4,000 of them, and 64 hours of accumulated freefall time, I'm definitely not on the first (or second, or third) rush of excitement.

That's not to say I'm not excited and feeling butterflies, thinking of making a jump after five months on the ground. I made my last one at the end of September, and then I crashed and hurt my shin while hiking! I'll let you know how it goes, and how it felt after a layoff. Have a great weekend!
:-)
Posted by DJan at 2:00 PM