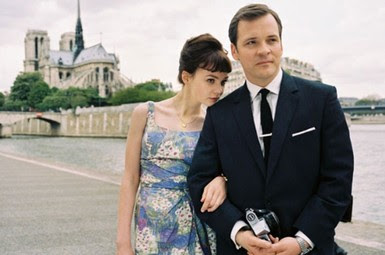 Yep, my friend Judy and I went out to see another movie, this one called An Education (the link takes you to my favorite movie link, Rotten Tomatoes, which gives this film a 95% freshness rating). Set in London in 1961, it's the story of a young sixteen-year-old schoolgirl who falls for a guy twice her age. Played impeccably by British actress Carey Mulligan (who's in her twenties, I found out), Jenny learns quickly about the sophisticated world of David (Peter Sarsgaard) and his cohorts.

David is charming and takes her to amazing places, and she is so smitten that she decides his world is way better than the one she's known all her life. And then she discovers some not-so-nice sides of David, but since he showers her with expensive gifts, and she thinks she loves him, not to mention she loses her virginity to him (and this before the swinging sixties started up), she agrees to marry him and drops out of school before taking her final exams. She is smart and witty and had every intention of going to Oxford before all this happened.


As Jenny herself notes at one point, silly teenage girls are always being seduced by glamorous older men, but what "An Education" portrays with such appalling (and improbably amusing) clarity is the complicity of Jenny's parents in their daughter's alluring, perilous flirtation with adulthood.

The period was created so completely that nothing stood out as being false in the setting, and of course it took me back to my own 1961 young womanhood. And I did wonder about this guy, who is he exactly. You find out before the movie's end that all is not as it seems, and that David is, as you might have guessed by now, a cad.

I would give the movie a solid "good" rating, although never would I have guessed that almost every reviewer thought it was better than I did, but of course I'm not an expert. [News flash: it got nominated for best picture and best actress for Carey in the Oscars!] I know what I like, and I liked it and will probably see it again on Netflix sometime in the future. Every time I see a movie the second time, I usually like it much better because I know the ending. I no longer feel so caught up in the story and can appreciate all the nuances.
:-)
Posted by DJan at 4:03 PM