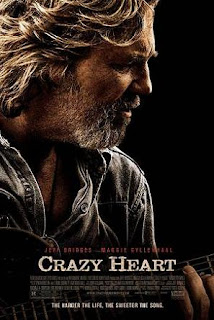 Yesterday my friend Judy and I went to the movies again. This time we saw "Crazy Heart" which is playing in the art venue (a small 75-seat theater), the Pickford Theater, here in Bellingham. We got there early so we would be sure to get in, because we heard that the lines were around the building.

Sure enough, even a half hour before the doors opened, the line had started. There's a reason for this, although most of us in line wondered why it was not playing in any of the major theaters. The movie was made to be a direct-to-video release, and wasn't even scheduled to be in any theaters until it was bought by Fox Searchlight Pictures.

The movie is about Bad Blake, an alcoholic down-and-out country musician played by Jeff Bridges. The story opens with him arriving at a bowling alley where he's scheduled to perform, and he gets out of his old station wagon looking like, well, a serious has-been. From one of the Rotten Tomato reviews:


As Bad Blake steps out of his truck upon his arrival for a bowling-ally gig, Cooper (the director) shows his audience exactly what a mess of a man he has become -- all in less than 20 seconds of screen time.

Anybody who has spent any time with a musician and/or a drunk will see how authentically this portrayal of Bad Blake was captured by Bridges. He's got nothing left in his life except booze and his music, and you can't help but feel he's at the end of the road. And then he meets Jean, played by Maggie Gyllenhaal, and although she can see who he is, she gets involved with him anyway. She's got a four-year-old son who Blake begins to care about, too.

Blake wants to clean himself up and tries, but he can't. And then he does something that causes Jean to break up with him, and he retreats into the bottle. The scenes of him with his bottle, staring into the depths of his soul, are so heartfelt and wrenching that I just sat in the movie theater with tears streaming down my face. And then he calls his friend and says he wants to get sober.

Blake goes to AA and finds his way back to life. It's so beautifully done. Bad Blake and his life were the first things I thought about when I woke this morning. It's a movie well worth seeing, and it ends with you believing that Blake will make it. I hope that Bridges wins an Oscar for this performance, because he richly deserves it. Maggie is also nominated for her performance. If you get a chance to see this movie, I hope you do.
:-)
Posted by DJan at 6:35 AM