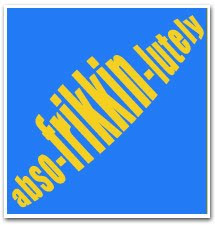 I'll bet you don't know what a tmesis is. I didn't, until I received in my emailbox the World Wide Words edition for the week. It comes every Saturday, and if you click on the link, you can sign up to get it too.

Back to what a tmesis (pronounced tuh-MEE-sis) might be. Well, according to Michael Quinion, who writes the World Wide Words website, it's the stuffing of one word into another, as in the title of this post. The origin of the word is from Ancient Greek, meaning "cutting." Interestingly, in Australia it's also known as a tumbarumba. They often insert the word "bloody" inside two words, as in "abso-bloody-lutely." Wikipedia gives some humorous ways that a tmesis is used in the English language:
Isn't this fun? When I told Smart Guy about it, he said the first time he ever heard it used was by a friend many years ago, who said, "My hammer has disa-frackin-peared!" (except the word was not "frackin" but you can guess what it was).

The funny thing is that I've heard the phrase "a whole nother" my entire life and didn't even think about the fact that "nother" is not a word or that I had heard somebody make a tmesis!
:-)
Posted by DJan at 12:53 PM