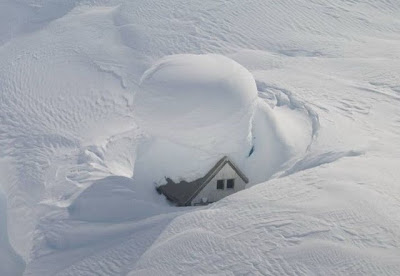 First of all, I'd like to share a picture that Smart Guy sent me yesterday, showing some REAL snow. I'm not sure where it was taken, but I think it's a little more than the East Coast has right now. I know it's "somewhere in Switzerland." That's one strong roof!

And guess who's coming to dinner at my place? This Cooper's Hawk. I have gotten a little bit used to the fact that he sees my bird feeders as HIS dinner, and he's right: he's a hawk, a raptor after all, and his dinner is usually one of my well-fed bird treats. It's the way the system works. I took this picture after he swooped in and missed. He hung around for awhile longer before flying off, but I have seen him before able to catch one on the wing. Amazing how much he blends into the tree, isn't it? (Click to enlarge) 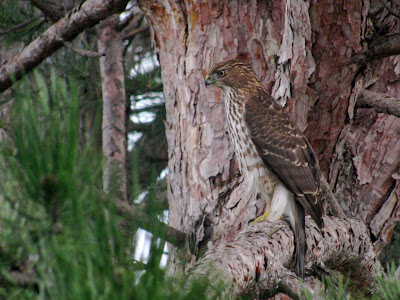 Finally, I just read two rather distressing posts by some people I follow regularly. The first was from Tiff over at Still Seeking Sanity. She's got four young kids and went to Chuck E. Cheese and wrote this post about her experience there. It makes me totally and completely scared about the future of our next generation. She wrote that some parents just stood by and let their children rifle through other people's things and actually watched them try to hurt other kids, without a word to them. This is wrong.

And Jeff over at My Life... Lived My Way, who is a teacher and wrote a post called "Tired" relates how discouraged he is about the way people are not standing up to, well, anything. (Warning: he uses the F word in this post.) I never thought I would say this and really mean it, but I truly am wondering "what is the world coming to?" And especially, what is OUR world coming to?
Posted by DJan at 3:19 PM