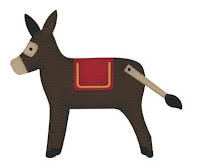 I have thought about tagging some of my posts so that I can pull them up and read them in a more reasonable way than searching through them. Now that I've got more than a hundred, it seems like a daunting task. I was mulling a post about names, what they mean, how we come by them, but I vaguely remembered writing one already. I just found it here and read it. So I've already done it.

Some of the people I follow use a tag or label cloud. This gives a visual image of which tags are used the most (or least) by having them vary in size. I don't use other people's label clouds, so this is probably not the way to go. But first, you have to LABEL THEM. This seems really a little bit in the same ballpark as filing. When I would try to organize my office when starting a new project, I would put everything in folders according to how I thought they should be categorized. Before the project was over, I would have re-organized all the folders with different naming schemes at least twice or three times until I was able to pull up the correct folder every time. Somehow it seems like labeling or tagging my posts would be similar. And then I need to edit every one I want to tag, right? I notice that some people have gone back and done that, and I'd really be interested in finding out how one decides to tag a post. The internet of course has plenty of information. I found this website helpful, but I'm still stymied at how to begin.

Oh, and just to show how hard it would be to figure out how to label my posts, I want to throw into this post the recipe for the Caribbean Yam Salad shown in my Thanksgiving post! Some people have asked for it, so here it is:


In the picture you can see all the ingredients pretty easily, but I upped the red bell pepper and pumpkin seeds because I like both of those a lot. If you try it, let me know what you think of it. And I'm looking forward to learning what other people have found about tags, and I'd sure like to know if you use them or not, on your site or others. Thanks!
:-)
Posted by DJan at 2:01 PM