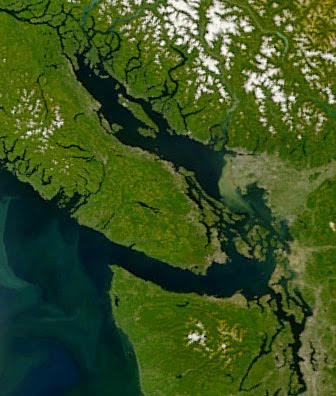 Recently the complex of waterways where I live has been renamed. The satellite map above shows the Strait of Georgia (the upper center waterway, which includes Bellingham Bay), the Strait of Juan de Fuca below (Washington's Olympic Peninsula comes to a point below it), and Puget Sound, at the lower right. And of course there's the Pacific Ocean, far left. Both Canada and Washington have to pass resolutions to change the name to the Salish Sea. Why the name change?

Salish is a term used by linguists to describe the peoples and languages of tribes in the Pacific Northwest. Bert Webber is a retired marine biologist who lives in Bellingham. He says he "is driven by science that shows the waters of Georgia Strait, Puget Sound and the Strait of Juan de Fuca operate as one ecological unit. The once abundant waters have suffered extreme degradation over the years, and he believes creating an over-arching identity, much like the term the Great Lakes, will help to better manage and protect resources" (National Post, 14 Nov 09).

Here is a map that shows the boundaries of the Salish Sea. I myself am not sure what is accomplished with the name change, but I like the idea that the Native Americans who have lived here long before the rest of us might get some well-deserved recognition. Wikipedia says the Coast Salish are a group of indigenous peoples who live in southwestern BC and northwestern Washington. The different tribes are all grouped together under the one name. 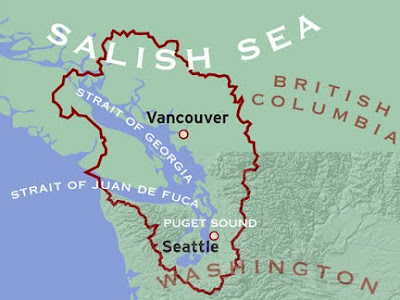 Even though the name still needs to be ratified by both nations, I guess it's well on the way to becoming official. I wish I could find some information about what the Native Americans think about the idea. And it all started because this one guy decided way back in 1988 that it was a good idea. I'm not sure how I feel about it, because after all, people get attached to the names they have known all their lives. But if it served to commemorate the Native Americans, it's a good thing. What do you think?
:-)