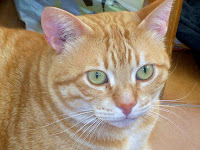 Many years ago I lived in a small apartment at what was then called "garden level." In other words, it wasn't exactly a basement apartment, but it wasn't at ground level, either. Once you came through the door you took a few steps down into the apartment. There were two bedrooms and for awhile I shared it with a girlfriend. This was long before I was married to my current husband. The landlady didn't allow pets. But that didn't stop me from feeding this beautiful golden colored wild cat that came around regularly. She wouldn't let me touch her but she had no problem eating the food I put out for her.

I named her Alchemy and she lived under the apartment in a crawl space. In Boulder it gets very cold in the winters, and I suspect that there were warm pipes down there that she used to keep herself warm. Well, since she wasn't spayed, she got pregnant, which was obvious only from her size and her growing appetite. One morning I woke to the faraway sound of mewing kittens, and I knew she had given birth. Once she was no longer pregnant, she became bolder at demanding to be fed (of course she had a family of unknown size to feed). Once she even allowed me to get close enough to reach down and put the food in front of her.

Never did I see any sign of those kitties, and one night I woke to horrendous sounds of a fight going on under the apartment and then the strong smell of... skunk. Apparently a skunk got in there and found her kittens and that was, well, that. For weeks afterwards, Alchemy would be looking for me through the kitchen window, which had a view out onto the ground at about my eye level. She would let me know when she was hungry and wanted some food, and I of course obliged.

A few weeks after the terrible row and smelly incident, what should appear but Alchemy in my kitchen window with a kitten! She looked straight at me and dropped the kitten onto the ground on the other side of the window, as if to say, "not my job any more." And then she walked away.

I of course went out and scooped up the hissing frightened kitten and put it in a box with a towel and brought it into the apartment. It was a very well-fed champagne colored thing, just adorable. What to do? Well, I couldn't very well keep the kitten because the landlady wouldn't allow it, and after all that the kitten had survived I was not willing to just let it starve to death. Alchemy would not go near the kitten again. I decided to take this little life to the Humane Society.

When I got there, they told me they could not take an unweaned animal of any sort, but they would be very glad to euthanize it for me. I was crying so hard by this time I couldn't see straight, but I decided no, this would not do. I took the kitten to the nearest pet store and explained my plight to them and asked how to feed this little one. The very sympathetic store owner looked over this deliciously colored kitten and said, "I would be very happy to keep it. It will be my cat, and I'll feed it myself." And that is exactly what happened.

A few months later I went by the store to see if things had worked out. The beautiful champagne-colored tomcat that lay at her feet had become her favorite cat. (She had a few, it seemed.) He had survived all the trials of his birth, and I was so glad to have been a conduit for all of this to have happened. I have never forgotten Alchemy and her beautiful kitten and wanted to share the story with you.
:-]
Posted by DJan at 1:01 PM