Most of my readers probably know who she is. Or maybe the youngest of you don't. 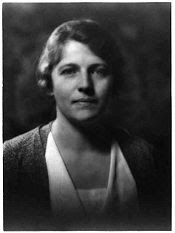 I first learned of her when I was a young mother browsing at the library, looking for good book. I happened upon The Good Earth, a book about family life in a Chinese village, first published in 1931. It has always been a favorite, and in 2004 Oprah Winfrey named it one of her Book Club books and it again became a best seller. This picture was taken in 1931.

I don't think I read any other books of hers until last week. I was rummaging around in the used bookstore down the street and saw several I had never heard of by Buck. I picked up Pavilion of Women (1946), intrigued by the title, and enjoyed it immensely. Then of course I went on Wikipedia to find out more about this amazing woman.

I didn't know that in 1938 she was the first American woman to receive a Nobel Prize for Literature "for her rich and truly epic descriptions of peasant life in China and for her biographical masterpieces." Born in Hilsboro, West Virginia, to two Presbyterian missionaries who had moved to China shortly after getting married, they returned to the States for Pearl's birth. She was born Pearl Sydenstricker in 1892.  When Pearl was three months old, they returned to China and she grew up bilingual, speaking Mandarin as well as English.

When she was nineteen, she returned to the States to attend college, where she graduated Phi Beta Kappa in 1914 and then returned to China that same year. In 1917 she married John Lossing Buck, and they both taught at Nanking University. They had a daughter who was born with PKU. In 1924, John Buck returned to the States for a sabbatical and Pearl earned her Master's degree at Cornell. They both went back to China. In 1935, the Bucks divorced. Richard Walsh, president of the John Day Company and her publisher, became Pearl Buck's second husband. The couple lived in Pennsylvania. Pearl and John had also adopted a daughter who took Walsh's name.

That's just a short synopsis of this incredible woman's life. The number of books she wrote are truly astounding, including two autobiographies and a biography each of her mother and father. She established several orphanages for children of mixed parentage, who in her day were considered to be unadoptable. Then in the 1960s she traveled around West Virginia to raise money to preserve her birthplace and mother's homestead. Today The Pearl S. Buck Birthplace is a historic house museum and cultural center. All this information is lifted from that Wikipedia link above.

I plan to go to the library and check out lots of her stories, because they are such a wealth of information and interesting, as well as getting me involved in the lives of her characters almost immediately. In Pavilion of Women, Madame Wu is the main character in the book. Here is the last paragraph in the story:


Yes, she now believed that when her body died, her soul would go on. Gods she did not worship, and faith she had none but love she had and forever. Love alone had awakened her sleeping soul and had made it deathless. She knew she was immortal.


Perhaps you can see why I am now enchanted with this woman. When I look at her long life (she died at 80) and think about my own life, I wonder about my biography and what I will leave behind. She has truly inspired me through her words to think large.
:-)
Posted by DJan at 12:32 PM