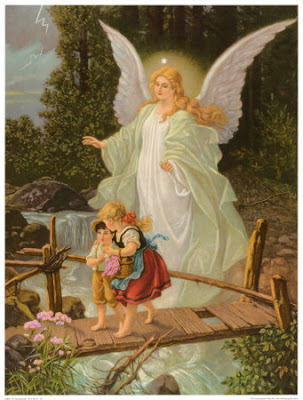 Do you believe in guardian angels? I do. This picture was one of my mother's favorites and she had it hanging in her bedroom for years. I think it had some special significance to her, but the significance of this picture for me now comes from her. It is a lovely thought. In trying to find out what other people think about guardian angels, I found that many religions have a place for them: Christianity, Islam, Zoroastrianism, and ancient Greek philosophy.

Many decades ago I went to a faith healer who purported to channel your guardian angel(s). I don't remember her name now, but she told me I had one for many years and then in the mid-1970s I gained another. She told me their names. She was a small sort of mousy woman that you wouldn't look twice at on the street. Shy about her ability, she didn't advertise but had people come to her by word of mouth. She allowed you to record the session (which I think I did but it's so long ago I'm not sure). It was strange to watch her: she traced a circle on the palm of her hand with the index finger of her other hand as she stared at the air above my head as if she could see them. She told me what they had to say to me, which is lost in my own personal antiquity now. She took no notes.

She also said that they had some special words for me, which I haven't forgotten. Little did I know the trials and tribulations I would face in life. I call on the angels when I feel the need, and I often feel their presence. The reason they came to mind for a post is that I had a health problem on Wednesday and called the doctor. I went to see him the next day, Thursday, instead of going on my usual Thursday hike. He wanted me to see a gynecologist and said he would try to get me in to see one in our clinic before the end of the week.

I had a call from his nurse minutes after returning home, and she said I had an appointment that very afternoon. Now I haven't been to a gyno doc in years, so of course I went on the internet and read all about this guy, and he got nothing but rave reviews. When I went for the visit, his office staff and he himself were all very helpful and put me at ease. After the exam, he suggested an ultrasound, which I have scheduled for this coming Wednesday. Feeling relieved and well taken care of, I went to the window to see if I was to schedule myself or if it would be done for me. The lady at the window shook her head in wonder that I was able to see this doctor, who is booked until December, so quickly. She told me that she had had a cancellation less than five minutes before my doctor called to see if I could have an appointment soon. It's not often that an hour-long appointment would open up -- ever.

Was that my guardian angels at work? I think so, and it's caused me to think of all the times in the past that something has intervened in my life to help me. Whatever the cause, I am ever so grateful. And of course I wanted to share this with my cyber klatch.