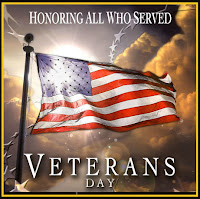 It used to be called Armistice Day, until 1954. I saw this poem by an anonymous writer on the New York Times today:

WAR
Politicians talk about the need of it,
Old men boast about the glory of it,
And the soldiers just want to go home.

Many of my blogging friends have already posted their contribution for this day. I have been thinking about my own veterans and family who are currently on active duty. I don't know exactly what to call my son, whose birthday would have been yesterday. He was serving in the Army when he died, so I guess he would technically be called a veteran, although he would have made a career of the Army if he had lived. I have a niece and nephew who are now serving in the Army. My dad and brother are both veterans.

I looked up the word "veteran" to see if it applies also to those currently serving in the Armed Forces. I'm still not sure. All over the world people throughout the ages have lived and died for a cause. For some reason, I keep thinking about the line in the old Cat Stevens song that talks about "dancing on this earth for a short while," which is true for all of us, both those who live long and glorious lives, and those who die young.


Maybe the very young will figure out how to have a world without war and strife. I can only hope so, because I think about all those who were cut short in the arc of their life just to die in a war, mostly young men in their prime of life.
:-(
Posted by DJan at 12:20 PM