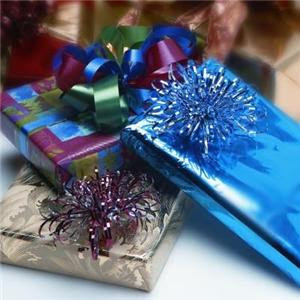 While busy admiring all the wonderful seasonal banners my fellow bloggers are uploading, I started thinking about Christmas presents, ones I have given and received through the years that have meant more than the usual. It seems like a good time to start telling these stories, as well as hearing some of yours.

Before I do that, though, I checked my blog reader and found a truly amazing story written by a woman in Seattle about her experience of having been struck by lightning (while traveling in her car with her two children). It's on the Cliff Mass Weather Blog. I hope you enjoy it as much as I did. (The caption under the first picture has a typo, should say "struck" rather than "stuck.")

Back to Christmas presents. The one I remember the most was actually a lesson in humility. My paternal grandmother, who wouldn't let us call her anything but "Mommy," brooked no nonsense. One year she was visiting us for the holidays, and I remember asking her what she was going to give me for Christmas. I did this to every member of my family; she was no exception. I didn't really want her to tell me but to ask me what I wanted, my crafty way of doing their shopping myself. She told me to stop asking her or I wouldn't get anything but a can of applesauce. I laughed her off, of course, and went around to each person a day or two later with the same question.

One day, under the Christmas tree, we discovered that Mommy had put out her presents. The one labeled for me had the suspicious shape of, well, a can. When I opened it on Christmas Day, thinking she was just playing with me, there was the promised can of applesauce. No attached note saying my real present was elsewhere. I was crushed, but she told me it was my own fault since I wouldn't learn my lesson any other way. Everyone else received "real" presents from her.

All these years later, I remember very few of the presents I have received from anyone, except that can of applesauce, which remains in my memory as the lesson of humility I asked for. It was priceless.
:-)
Posted by DJan at 10:09 AM