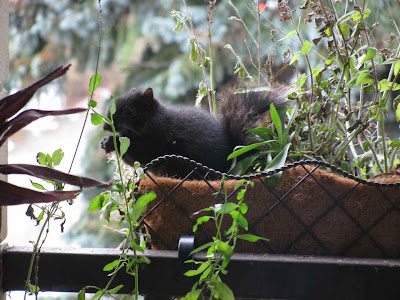 I finally got a chance to get a few pictures of one of the black squirrels who visits my porch (click any to enlarge). There are four usual suspects: two gray squirrels and two black squirrels. The black ones are significantly smaller than the gray squirrels, but I am not sure whether it's because they are younger or not. This squirrel went over to the wreath and pulled out a couple tasty morsels and then climbed back in the flower box to consume them. I figured that Judy (SquirrelQueen) would enjoy seeing this cute little guy. Look at those tiny little ears! 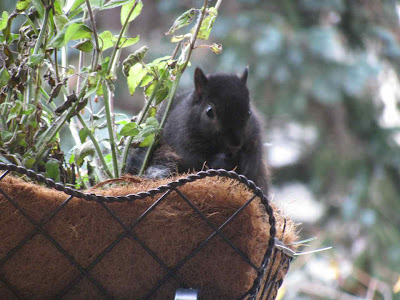 Here he looks a little more like a rodent (which squirrels are, actually) with his beady eyes keeping me in focus while he chomps down the rest of his treats. As soon as I moved toward the door (these pictures are all taken through the front window) he scampered down the side of the railing. Here's a portrait of his compatriot, the gray squirrel, who actually looks as if he's laughing at me, doesn't he? 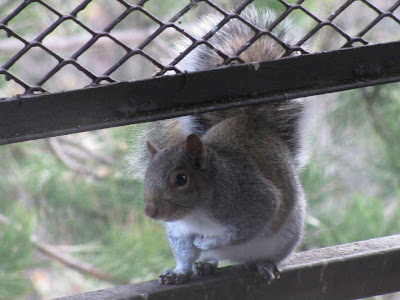 Now that's a tail! Nothing skimpy and half grown about that tail. I don't know what he is clutching to his chest, but he stayed frozen in this position for at least a minute, not moving. While at the Wild Bird Chalet this morning, I waffled about buying some unshelled peanuts for these guys, but I decided against it, since half the other apartment dwellers already have set them out. No wonder he's so well fed!

I started my hat project yesterday. After three false starts (it is REALLY HARD not to twist the stitches when you join them together, I found), I finally had to enlist the help of my resident Smart Guy, who helped me fit them together properly. The second time I was sure I had it, until four rows later... well, any of you who knit know what I'm talking about. Here's how far I've gotten, with a picture of what I hope I end up with: 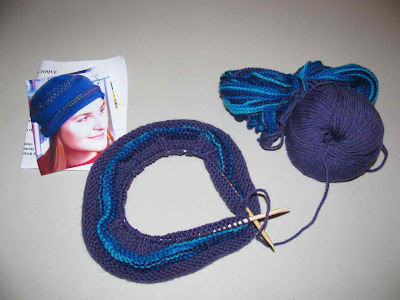 As you can see, the brim of the hat naturally curls up. I'm on the stockinette stitch just past the first colors. You knit the hat upwards until you gradually decrease the stitches to finish it off. I figure at this rate it will be done by the end of the week, and then I'll start on the second scarf, which is not purple but pink.
:-)
Posted by DJan at 1:46 PM