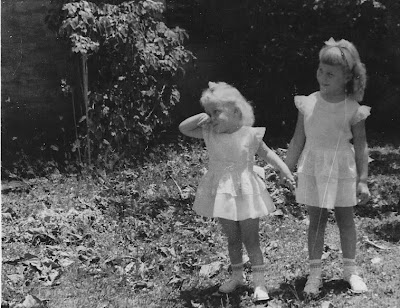 Norma Jean and Jan sometime in the 1940s

This is about my sister. Well, one of them, anyway. Norma Jean is closest to me in age, two and a half years younger, so we grew up playing dolls together and being siblings. She just discovered my blog yesterday, and since I've been casting about trying to decide what I want to write about today, it's going to be about her. Actually, about us.

The blog post I've been trying to formulate since I woke up this morning has to do with shame. I feel a fair amount of shame about some aspects of my personality, and I'd really like to let that go, and give myself a break. But when I think of my childhood with Norma Jean, I feel it again. Once I broke a thermometer and knew that Mama would punish me, so I convinced Norma Jean to say she had broken it. I don't remember the outcome of that experience, but I know I still feel shame about having done that.

When we grew up, moving all around the country and to Puerto Rico (our Air Force dad was stationed at the air base there, twice), I reveled in making new friends and being the "new girl." Norma Jean hated it; she made one friend and agonized when she left one behind and had to make another. I didn't even notice, since I had developed a persona that allowed me to hide behind. I never made just one friend but several, and I would sometimes play one against another. This of course backfired when I grew up because I never learned how to let that persona go and form close relationships.

Once I became a teenager and began to care mightily about how and where I fit into the local scene, Norma Jean figured out ways to make me suffer. She would threaten to tell some boy I was interested in at the time about some of my worst habits and I would buckle under and plead for mercy. We were best friends and best enemies at the same time. I have a vague memory of looking into a baby crib when she was a few months old and hating her. Probably because she was now the favorite, and I was really used to that position myself.

But all that is in the past. Now I am looking at a birthday next week, and I'll be 67. I remember when I turned 60 and was unwilling to have a birthday party because I was, well, old and didn't want to be reminded about it. And that was seven long years ago. Now my birthdays have become precious and sought after. Once I let go of thinking I'd live forever, I began to cherish the years, the seasons, and the days, that I have left to me.

And another thing I cherish so much that it brings tears to my eyes is my relationship with Norma Jean, my sister. I have other sisters, three others to be exact, but they never were close enough to my age to form such a strong attachment. Norma Jean, I love you, and I am still working on growing out of my old habit of being such a brat.
:-}
Posted by DJan at 2:14 PM