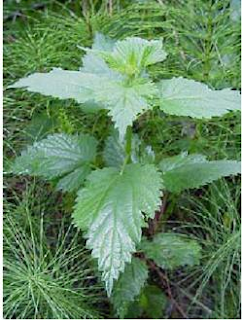 On our last Thursday's hike, I brushed the knuckles of my left hand against a plant. This was just before Marjan, who knows the plant well, warned us to be careful about brushing against this well-known plant, the stinging nettle. It looks very innocuous, but it's not. I was amazed at how quickly I knew that I had encountered this plant, because those knuckles began to itch and sting, as if bitten by a hornet.

I stopped to put on my gloves to protect myself from any further inadvertent contact with the plant and thought nothing more about it. On and off during the day I noticed some slight discomfort on my hand, but it wasn't anything much.

But that evening when I got home and showered, I noticed that the discomfort hadn't subsided in that hand, so I of course quickly got on line to find out how to treat the pain and figure out how long it would probably last. The Wikipedia link gave me this information:


The leaves and stems are very hairy with non-stinging hairs and also bear many stinging hairs (trichomes), whose tips come off when touched, transforming the hair into a needle that will inject several chemicals. ... This mixture of chemical compounds cause a sting or parasthesia,  from which the species derives its common name, as well as the colloquial names burn nettle, burn weed, burn hazel. The pain and itching from a nettle sting can last from only a few minutes to as long as a week.

Oh great! As long as a week? But the link also gave me some ideas of how to treat the pain: anti-itching medications, vinegar, and even mud. If I had only known this during the hike, I could have taken some of that copious mud and smeared it onto my hand. I also learned from a little more research that some people suggest using an effective method of adhesive tape applied directly to the affected area (which pulls out the little hairs) and then an application of hydrogen peroxide. Since the mud was readily available, however, that is what I should have used.

And then, wonder of wonders, yesterday while at the Farmers' Market, I saw several places selling stinging nettles, and I learned that it has a variety of health benefits. This website gives eight health benefits you can get from stinging nettle. (The Wikipedia link also has some of this information.) I did drink some nettle tea that one of the vendors was offering, and now I think I probably got some of the health benefits of the plant when it was applied directly to my hand. The sting wore off after a few days, but I notice a tiny bit of itching is still there if I absentmindedly scratch my knuckles. 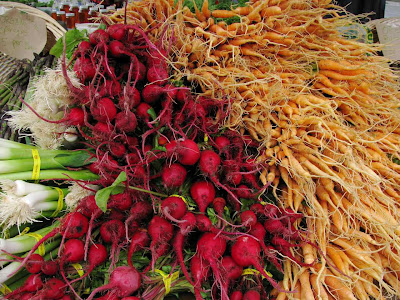 While at the Market, I couldn't resist taking a picture of these "rooties" offered for sale. Although I didn't buy any of these, the colorful arrangement of leeks, beets, and carrots cheered me, even though the weather this weekend (and last) have kept me thinking of indoor activities, such as making curtains with my new sewing machine. I think I am finally proficient enough on it to give them a try. What could possibly go wrong?
:-)
Posted by DJan at 11:10 AM