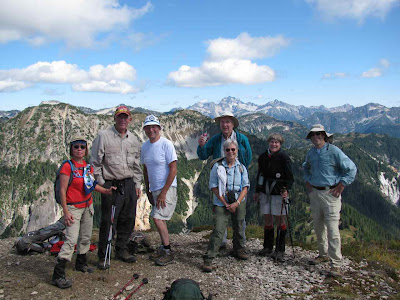 In this picture, you see some very fit Seniors who climbed Hannegan Peak last fall (click to enlarge). I wanted to write a post about how I got started exercising and went looking for some stock photos of old people exercising, when it suddenly occurred to me that I've got lots of those pictures right here in my own photo gallery. Everyone in this picture varies in age from the "baby" at 62 to the oldest at 74. More than half are over 70.

Although only seven of us made it to the summit, 17 Seniors went on this hike. If I were to do it again, I'm not sure I would choose to climb that last 500 feet, because it was just plain hard. But the reason I went for it is that I sometimes get what is called "summit fever" and want to see over to the other side. Now that I've done it, I don't need to do it again.

I started exercising on a regular basis in my mid-thirties, when I decided to stop smoking. As a pack-a-day smoker, I had tried several times to quit but I just couldn't. Climbing a set of stairs was impossible without stopping halfway up. I was overweight and very unhappy about the prospect of living for another thirty years or so in this rapidly deteriorating body. I bought myself a pair of running shoes and decided to train for a marathon.

Uh-huh, a marathon. I've been told that I don't know how to do things halfway. Within a week, I had shin splints, a painful condition that pretty much stopped me in my tracks. I went to a running store and talked to them about my condition and discovered that I was going about exercise in the wrong way. First of all, they told me to walk and jog, training myself in intervals, and until the shin splints cleared up,  just to walk briskly. This was NOT my idea of what a marathon runner does, but I listened.

Within a year's time, I could jog at a ten-minute-a-mile pace and finish a 10K race (6.2 miles). By the time I had done this, I was definitely hooked on exercise. I had lost weight, had no desire to start smoking again, and had actually run a race, and I didn't finish last! By the time another decade had passed, I could run a 10K race in eight-and-a-half-minute miles. But I never ran a marathon, since I found that I would get injured if I began to increase my weekly miles past 20 or 25. I continued to run for fun several times a week, usually on my lunch hour at work, until I was in my early fifties.

I had a serious pelvic fracture from skydiving at the age of 57, and I never ran again, except for an occasional mile or two just to see if I could. (I could, but I couldn't walk the next day.) Instead, I began to enjoy step aerobics, working out with my fellow exercisers on my lunch hour. We had an instructor who was a retired aerobics teacher, and she is still teaching on her lunch hours at my old place of employment.

Now I'm 67 years old and hooked on my exercise class at the YMCA, as well as my weekly hikes with the Senior Trailblazers. I would not enjoy my life nearly as much as I do if I could not exercise, and it's definitely become a habit. I like to exercise with like-minded people because I am energized by others. You are never too late to start making it a habit, and while I was thinking about this post, I found some good websites to help motivate you. Here's a small sampling of what I found:

So Dr. Bortz (the 80-year-old marathoner) did get to run a marathon, actually 40 of them. I found this was not my path, once I started on an exercise direction. But the desire to get fit became a habit I am not likely to grow out of, as long as I'm able to move my body in some way, I'll keep on truckin'. I'd love to hear about your exercise wants and desires, if you are willing to share.
:-)
Posted by DJan at 1:37 PM