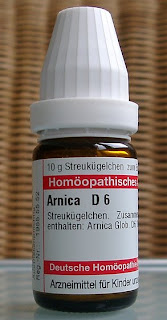 Today after my workout, I got a great massage from Sarah, who has an office at the YMCA and with whom I schedule a massage every two or three weeks, whatever I can afford. While I was on my hike yesterday, I slipped while climbing over a wet log and sprained my thumb. It's not a bad one, I've had worse, but I decided to tape it so I wouldn't forget to treat it with care.

Before the massage starts, Sarah always asks if I've got any issues I'd like her to deal with, so I told her about my thumb and showed her the taped digit. She asked, "are you taking Arnica?"

Well, if I had a dollar for every time somebody suggested I take arnica for a bruise, I'd have enough money to open a bank account. Apparently Arnica is used by many people to treat bruises and swelling, usually in a homeopathic formula. I remember years ago when I had a pretty good bruise, I used something called "Traumeel," a homeopathic topical cream, but other than that, I've never used any homeopathic remedies. I'm not sure I believe in them.

But just to be on the safe side, I stopped by the Co-op to get a bottle of Arnica tablets and started taking them. For what it's worth, after two doses, my thumb does feel better. I believe that the placebo effect could be responsible, or that it would have been better anyway (I don't have any way to test the theory). So I thought, well, maybe I can get some feedback from my blogging buddies about what they think about Homeopathy. (This link will take you to Wikipedia, which gives information about what it is and what the traditional medical community thinks of it, which is not much.)

But I remember very well when allopathic medical doctors dismissed acupuncture, which is based on body meridians, as hocus-pocus. That is, until they were shown unequivocally that it works. I went to an acupuncturist in Boulder for awhile and was amazed at how I could feel the energy moving between needles placed in my thigh. I became a believer when he cured my chronic knee pain and hot flashes.

Do YOU use homeopathic medicine? Do you believe it works or not? I'm really wondering if I've been missing out all these years on something I could have been using to heal up faster.
:-)
Posted by DJan at 4:16 PM