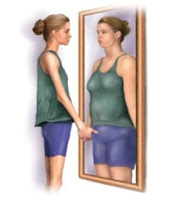 I was thinking about body dysmorphic disorder, also known as BDD, today as I was shopping for a new blouse. In the past few years, I have developed what can only be kindly described as a, well, flat tire around my waist. Usually I am not aware of it, and it's only when a picture is snapped showing this disconcerting feature that I even think about it much. Or when I undress to try on a new blouse.

That's a lie, really, as I realize that I think about it a LOT. I never used to have this flat tire, and usually I don't imagine myself as having one. But recently, I've realized that my body image as I see myself and my body image as it really is have diverged. In the picture above, you see a very thin girl who sees herself as being fat. This is one of the more well-known features of BDD, someone who cannot get thin enough to lose the fat she believes everyone else sees when they look at her. BDD also manifests itself in becoming preoccupied with one's body image, and in researching this post, I found that (of course) Wikipedia has a fascinating article with plenty of links for further study. This was taken from that link:


The disorder generally is diagnosed in those who are extremely critical of their mirror image, physique or self-image, even though there may be no noticeable disfigurement or defect. The three most common areas that those suffering from BDD will feel critical of have to do with the face: the hair, the skin, and the nose. Outside opinion will typically disagree, and may protest that there even is a defect. The defect exists in the eyes of the beholder, and one with BDD really does feel as if they see something there that is defective.

Now I know some of you are thinking of pictures of myself that I've put up on this blog, but you haven't ever really noticed that roll around my waist. That's because I am going to do everything I can to hide that particularly loathsome part of my current anatomy, from myself as well as from you. The reason for this post is twofold: first, to inform my blogging buddies that you are not alone in being self conscious about a specific body part that you are not happy with. There are lots of us out there.

The other reason is to "come out" about this and thereby (hopefully) let it go. My own particular body image, the one that I imagine I project, is that of a twenty- or thirty-year-old's curves. I forget that I am no longer in that category, unless a picture (or a mirror) reminds me that I am not a contemporary young gal. I completely forget that while I wasn't looking I got old. As my measurements changed, my body image didn't, and today I decided that I'm going to learn to be very happy in a 67-year-old body! It's not like my loved ones haven't noticed, but it's not something they focus on when thinking of my self-worth. It's me who does that. 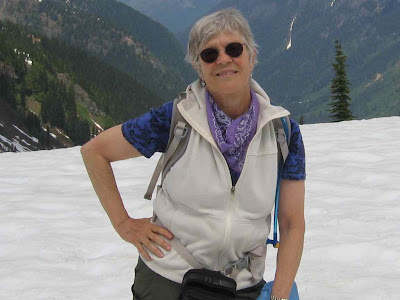 And that is NOT fabric around my waist, that's ME. I'm gonna try to be comfortable with it from now on. Kinda sorta, that is. But I should really do something about that nose!
:-)
Posted by DJan at 1:57 PM