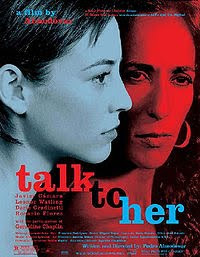 The weather didn't cooperate today for Smart Guy and me to go skydiving, so after giving up on our hopes for blue skies, I finally decided to watch one of the Netflix movies that had been languishing on my coffee table for a few weeks.

I chose to watch Talk to Her, a Spanish language movie made in 2002. It's a very complex and interesting dark comedy. That link will take you to Rotton Tomatoes, which gives it a 92% freshness rating. I liked the movie a lot, but I wouldn't say it was one of my all-time favorites. The reason I wanted to write this post about it is that it triggered something I've noticed many times before: the difference in ethnic temperaments reflected in movies made by directors of different nationalities. Pedro Almodovar, the director of this movie, is (I guess) rather well known for avante-garde movies that deal with melodrama and obsession, teasing truth out of the absurd.

In this movie, a sensitive man who cries at the drop of a hat also writes articles and travel guides, and he falls in love with a female bullfighter. She ends up in a coma from a bullfight gone bad. The other couple in the movie is a male nurse, Benigno, who falls in love with a ballerina who is also in a coma from having been hit by a car. The men become friends, and the movie revolves around these four people. Almodovar uses flashbacks to develop some of the relationships. An excerpt from one of the reviews:


In the end, some of the lovers live and some die, and it becomes obvious exactly who the real cripples are. There is perhaps a smidgen too much patness in Almodovar’s fantastic script, something a little too easy about the way he wraps this up, but he doesn’t shrink from raising some problematic questions. Benigno is a creepy character, who nevertheless touches us — with his Peter Lorre eyes and dewy softness, he reminds us of a certain confused type of young man we all encountered in high school or college. He is all hurt and yearning and he uses his “devotion” as a kind of weapon.

So, as you can probably see from this description, the movie is so... Latin! I remember the time I spent in Mexico when I learned about telenovelas, those melodramatic soap operas that are watched by millions of people. (That link will take you to the Wikipedia page that compares telenovela style by country. It's fascinating reading.)

But what strikes me is the difference in temperament in movie styles by nationality. I recently watched a German movie, The Lives of Others (the link is to my review of the movie) and sometime last year I watched and thoroughly enjoyed a French movie, "I've Loved You So Long." The comparison of the style and feeling of these movies is, to my mind, strongly flavored by the nationality of the directors.

It made me wonder how much of what I experience in life is colored by my own American nationality. How real is this premise? What's your take on it?
:-)
Posted by DJan at 5:06 PM