Yesterday all 454 teams in the Ski to Sea relay race contended with each other, some very competitive, others not so much. Since it was overcast with rain spitting now and then, I decided to pretend like I'm a real Washingtonian and go out in the light rain as if it wasn't there. That's one thing I've noticed here: if it's a light rain, most people go about their business without raincoats or umbrellas.

The Ski to Sea began at Mt. Baker with a 4-mile cross-country loop, then the downhill skiers took over for a 2.5-mile loop (this made me wonder how you do a "loop" with downhill skis, before I discovered that they have to climb up the hill before skiing down). There's a PDF file showing the entire course on the Ski to Sea website, if you're interested. The timing chip is passed from the team member finishing one part to the next leg of the relay. After skiing, runners descend on the road 2,200 feet in eight miles. Here's a picture I took from the newspaper showing a bicycle competitor who just took the chip from his teammate: 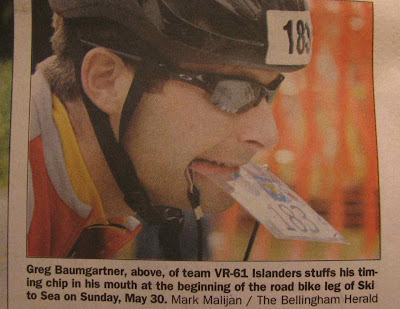 The running segment is followed by a 38.5-mile road bike race, which is followed by an 18-mile canoe paddle down the Nooksack River. Many of the team names were takeoffs on the name of the river: Kicked in the Nooksack and Nooksackulous, to name a few. One of my fellow Trailblazers was in the canoe section and we chatted when he picked up his team packet on Friday. I also took this picture of the canoe competitors from the Bellingham Herald: 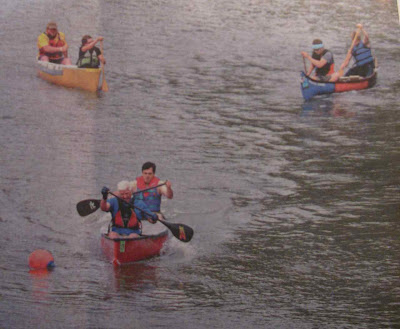 The canoe team then passed the chip off to the mountain biking team member, who went through 14 miles of muddy bike trails before passing the chip to the kayak team member, who would finish the race after a five-mile kayak race to the end at Marine Park. This is where I went to see the finish line. I saw several teams who came in within the first 50 teams to finish. Here's the kayaker from Well Hung Jury almost on the beach: 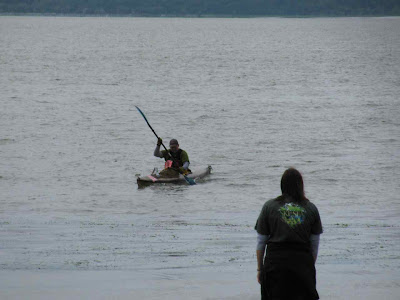 Once the kayak comes to shore, two volunteers pull the kayak out of the water, while the competitor raced (or hobbled, or somehow made his or her way) to the finish line to ring the bell, as shown below: 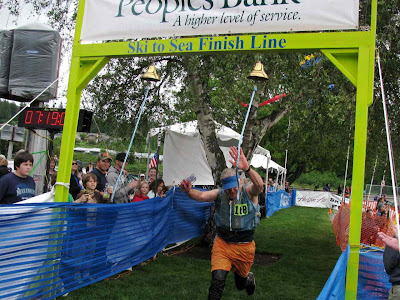 Once the bell is rung, the race is over for the eight team members who navigated the shoals of the Ski to Sea relay race, before finally calling it a day. The entire area in Fairhaven was shoulder to shoulder people, coming to support their friends, or people who were sporting numbers from earlier segments of the race to watch their team member finish. It was quite an experience, and after volunteering I am thinking (just thinking, mind you) about which parts of the relay I might be able to do. I've done quite a bit of cross-country skiing and still have my gear, and bike riding is not out of the question. 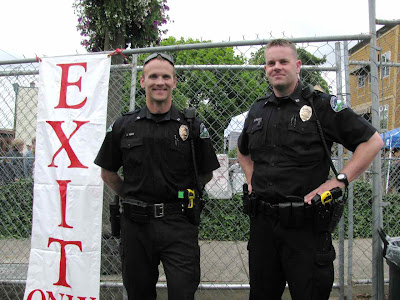 I finished my time in Fairhaven by going into the gated temporary "beer garden" and getting a brew while standing in the light rain and chatting with these two young men. They wouldn't let me out until I had finished the beer, since it was only legal to drink inside. I finally made my way to the bus stop and went home after a fine afternoon experiencing the Ski to Sea with what seemed to be most of the city of Bellingham!
:-)
Posted by DJan at 10:54 AM