Birds in the springtime 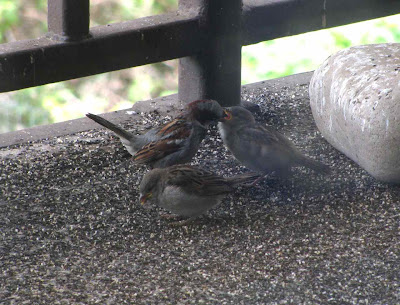 Well, it must be springtime when the sparrows start acting like this. At first I thought these two birds, the one being fed and the one closest to the camera, were females in a courtship ritual, since the bird with its tail up in the air was feeding them both. But these must be the first fledged sparrows of the spring, because according to this Wikipedia article, this is typical feeding behavior. These "babies" are actually bigger than the parents, but maybe it's just the fluffy down, what do I know? (Click to enlarge.)

Anyway, the springtime frenzy of birds in the neighborhood is amazing. They are flitting from place to place, and all kinds of new birds are singing in the trees around the apartment. I sometimes stop in amazement and listen to the cacophony of birdsong. The chickadees are constantly calling in their two-note song (which sounds to me like "pick me"), and with the sun coming up so early I am awakened every morning now by the constant sparrow chirp, chirp, chirp. Their song is the same note repeated over and over. Some of the other birds have beautiful songs, like the house wren. It stops me in my tracks when I hear it, and you can't help but think the bird is happy. 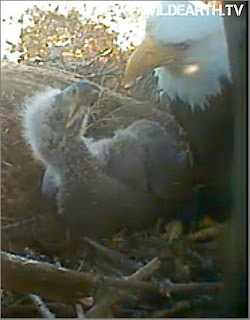 For those of you who have not been following the Hornby eagle cam in British Columbia, one of the eggs did not hatch, but the growth of the eaglet that did hatch and that is now less than a month old is amazing! Yesterday I watched Dad fly into the nest with five herring, and Phoenix (the eaglet's official name) ate one whole! Eagles put their food into a "crop" and his little guy gets his (hers?) so full he can't stand up! If you are interested in seeing this amazing hotspot video, click here! The main Hornby Eagle cam is available at the first link in this paragraph.

This picture of Phoenix and Mom is from the Facebook page for the Hornby Eagles, and I think it was taken yesterday. Phoenix's feet are now almost as big as Dad's! Eagles usually fledge around 85 days after birth, so we're looking at somewhere around the end of August for Phoenix to take wing. When we had that windstorm a few days ago, as soon as it was light I checked to see if Phoenix was all right. With his parents in their mid-twenties, I guess they know what they're doing. What did I do with myself before I started bird watching? Oh yeah, now I remember: skydiving. I'm going tomorrow, so I might not have a post up, but don't worry, I'll be back!
:-)
Posted by DJan at 3:14 PM