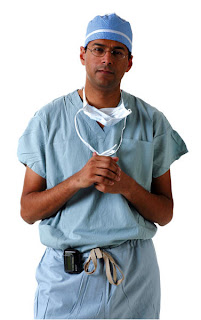 You may have wondered what the heck the name of this post is, because a few months ago, I wouldn't have had a clue, either. It's the name of a very interesting young man (born in 1965, young to me) who is both a surgeon and a writer. A friend of mine gave me a book Atul Gawande wrote in 2002, Complications: A Surgeon's Notes on an Imperfect Science, and I was immediately fascinated. I couldn't put the book down. Here's an excerpt from Publisher's Weekly:


Medicine reveals itself as a fascinatingly complex and "fundamentally human endeavor" in this distinguished debut essay collection by a surgical resident and staff writer for the New Yorker. Gawande, a former Rhodes scholar and Harvard Medical School graduate, illuminates "the moments in which medicine actually happens," and describes his profession as an "enterprise of constantly changing knowledge, uncertain information, fallible individuals, and at the same time lives on the line."

He writes from his heart, and there's a feeling that he is unwilling to compromise his ethics as he strives to become a good surgeon. I know from my own experience that surgeons in particular tend to think of themselves as knowing a whole lot more than the patient, and they let you know it in no uncertain terms. Not Atul Gawande.

Yesterday I finished Gawande's second book, Better: A Surgeon's Notes on Performance, released in 2007, and was just as blown away by his compassion for his patients and his willingness to tell the story of his journey in a way that made me care deeply about him, as well as his patients. I wanted him to succeed in his desire to become a better doctor. From the book jacket:


Gawande ... manages to capture medicine in all of its complex and chaotic glory, and to put it, still squirming with life, down on the page. ... With this book Gawande inspires all of us, doctor or not, to be better (Pauline W. Chen, NYT Book Review).

He has a new book out, which was on the New York Times Best Seller list at the beginning of this year, which I haven't yet read. I don't usually buy books when they are in hard cover; I wait for the paperback. But I might not wait for this one. It's called The Checklist Manifesto: How to Get Things Right. It had never occurred to me that something as amazingly complicated as an operation would not have checklists! But it's true. Steven Levitt wrote a review that I lifted from Gawande's website:


If there is one topic I have no natural affinity for, it is checklists. I don't use checklists. I'm not interested in checklists. Yet, against all odds, I read Atul Gawande’s new book about checklists, The Checklist Manifesto, in one sitting yesterday, which is an amazing tribute to the book that Gawande has crafted. Not only is the book loaded with fascinating stories, but it honestly changed the way I think about the world. It is the best book I’ve read in ages.

Atul manages to accomplish an amazing amount in his everyday life. Not only has he written three lengthy books in less than a decade, he still continues to work full time as a surgeon, lectures and travels pretty extensively, writes articles for the New Yorker, and he's married with three young children. I find all that to be amazing. He also has his own elegant and fascinating website, Gawande.com, which links to his books, articles, travel schedule, and a short biography. I got lost in there yesterday evening, after finishing his book and wanting to know more about this person. I read several of his articles and learned that he was awarded the 2010 National Magazine Award for an article about Medicare costs. It's there, too.

I was pretty much saturated with all I learned, but I couldn't lay it down until I told my Best Buds about him, too. Now I can get on with my life.
:-)
Posted by DJan at 1:06 PM