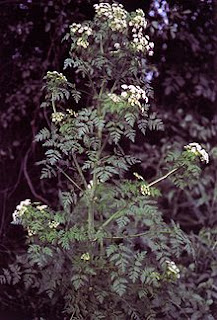 This morning there was an interesting article in the Bellingham Herald about poison hemlock. It seems this guy, David Westerlund, went out to his garden and picked what he thought was a carrot. He put it all together with some "cabbage, garlic, ginger, onions, sea salt and whey" to ferment and left it for six days. Then he had it for lunch.

Two hours after he ate it he was in the emergency room, because what he ate was poison hemlock, also known conium maculatum. If you go to Wikipedia (which you know I did), it redirects "poison hemlock" to the page about conium, which is the same hemlock that Socrates was given to kill him. From this Wikipedia link:


Coniine is a neurotoxin, which disrupts the workings of the central nervous system and is toxic to humans and all classes of livestock. Ingestion in any quantity can result in respiratory collapse and death.

Apparently Westerlund felt weird and his eyes stopped tracking properly, he got all shaky and went to the hospital. He will apparently recover with no ill effects. (I suspect he got a thorough stomach pumping.) And another woman in Washington state ate some in a salad and died. Since it grows in the springtime and can travel from nearby places by the seed blowing in the wind, it can show up in gardens.

But you can tell it apart from things that are edible by one very important sign: the stem has purple streaks or splotches on it. From the Herald:


Looking back, Westerlund said he should have realized it wasn't a carrot, even if he didn't know about poison hemlock. A carrot's stem is hairy, but the stem on the plant he pulled up was smooth and had purple splotches. The plant's taproot was white, like a parsnip, Westerlund said. The taproot on a carrot is orange.

Yes, he was very lucky. I thought it might help some others who might see a "volunteer" plant in your garden from making the same mistake. I used to see it growing near creeks in Boulder, and we wouldn't even touch it for fear of getting some of the bad juju on us. Apparently every part of the plant is poisonous. You are supposed to wear gloves when you pull it out, too, just in case. Anybody else ever seen it in the wild?
:-]
Posted by DJan at 12:37 PM