Turned back by snow 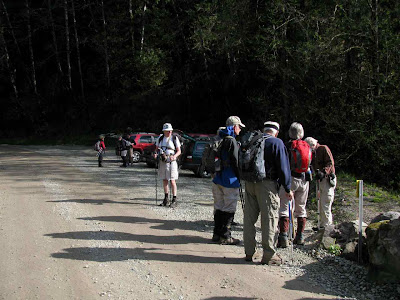 Fourteen Senior Trailblazers carpooled up to the beginning of our hike to Dailey Prairie. It started at the bridge over the Middle Fork of the Nooksack River, about five miles off the Mt. Baker Highway. As you can see from the picture, the early morning shadows were long, and we were mostly bundled up to start, except for Mike, who wears as little as possible. The entire hike would be on a road that goes up to Olivine Quarry and then a road off to the right that would take us to Dailey Prairie, as well as to a logging area. We could hear the enormous trucks coming from a long way off, so we would get out of their way as we trudged up the fairly steep road. We had some views of the Twin Sisters, not much, but a tiny bit, as we started up the road that would take us to the high-elevation prairie. You can see that recently some snow fell in the higher elevations in this picture. The clouds would clear off and then come back, so we were either too warm as we climbed, or too cold as the sun hid behind the clouds as a light breeze played tag with us. 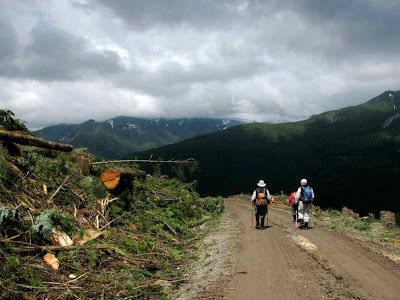 The reason we had any view at all was because of this logging operation that was in full swing as we hiked through. This view was probably not visible yesterday, as you can see from the new tree stumps on the right (click to enlarge) or the piles of tree branches on the left. The lumberjacks were very pleasant to us, and they were just doing their jobs, but this begins to wear on me. 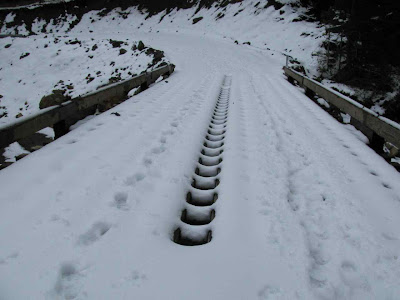 As we climbed higher in elevation, we ran into snow which got deeper and deeper. We crossed two bridges like this one, which consist of logs across in narrow strips. Not knowing what it looks like without snow, I got afraid when I saw holes in the snow with the river rushing below me. I was finally convinced by my fellow hikers that there were two planks of logs that didn't have holes in them, so I carefully followed the footsteps of those in front of me. In the crossing of these bridges, I knew we would have to go back over them on the way back down. We all managed without any mishaps. 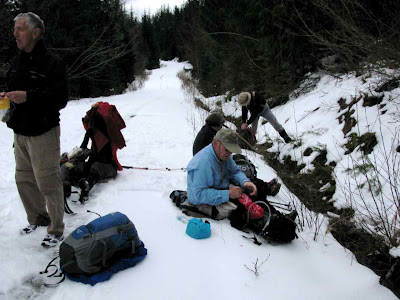 We finally stopped for lunch in the snow, deciding that another mile or so to Dailey Prairie was not going to be easy, as snow is quite tiring to navigate, and we had already come up almost five miles and 2,000 feet. We knew we would need to turn around at some point. Notice that Norm, on the left, is wearing tennis shoes, because he took his boots out last week to wash off the mud and forgot to put them back in his car. I'm sure his feet were soaked, but he is a good sport and didn't complain. If we had decided to go on farther, I am sure he wouldn't have objected. 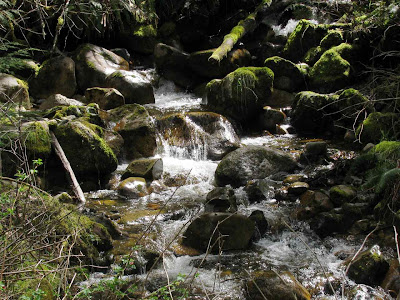 So we headed back down the road, and I got this picture of Galbraith Creek, which we crossed several times. This was the only time it was in sunlight and in shadow, with lots of my favorite moss on the rocks and logs. Now I'm tired after another great day, and Dailey Prairie is still something to look forward to next year. Maybe. If we're lucky.
:-)
Posted by DJan at 4:12 PM