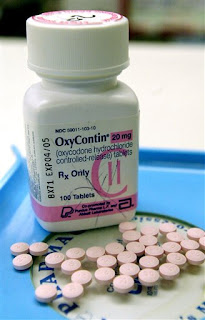 I just read Nancy's post over at Life in the Second Half about whether or not the states that have approved marijuana for medical use have stepped across some invisible line. She links to a post from Land of Shimp who talks about her son recently being approved to buy medical marijuana for pain relief from a shoulder separation.

This whole debate reminded me of my own struggle with addiction to pain medication. When I broke my pelvis so badly in 2000, I woke up to find I was being medicated with oxycontin, morphine, and a bunch of other narcotics I knew nothing about. My dose was pretty high, and I was still in quite a lot of pain (I had six bad breaks in my pelvis and a shattered sacrum). I was wearing an external fixator drilled into my hip bones, which held my pelvis together, along with two 7-inch pins to reduce the sacral fracture. It was a long recovery, although they didn't allow me to lay around for long; I had to sit up within a couple of days, as I remember, and I used a walker to get around for a couple of weeks before graduating to crutches.

Those days are pretty hazy to me now, since I was in a fog from the drugs as well as the pain. But as I began to get better, I asked about the pain medication I was on. The doctor told me that when I felt capable of dealing with it, I could start tapering off on the drugs. Because I was not wanting to become dependent on them, I tried to do this within a few weeks after returning home.

I couldn't do it. Although I finally got down to taking the smallest dose available to me, I could not go without the drugs for longer than a few hours. In doing some research about oxycontin, I found that within seven days of use, you are addicted to it. And this is no small addiction, let me tell you! The first symptom was itching, like I had ants crawling around under my skin, a runny nose, and a strong desire to make it all stop. Eventually I called the doctor and asked for a smaller dose, and for some advice. He told me just to cut the pill in half! You can't do that, I knew, because it releases the entire time-release drug in your system at once. But he didn't know that.

This was before it became a sought-after street drug. I think it had not been used for long, and the drug companies were pushing it onto the doctors as a safe and effective pain reliever. Yeah, it is that, all right, but it's one of the hardest things I have ever done, getting off of it. I had a friend who became addicted to it and managed to get it prescribed by several doctors because of continuing pain. She could not get off it, and eventually committed suicide (I think because they threatened to cut her off). We had several conversations about our struggle to get free of this narcotic. I eventually used percocet and ibuprofen to wean myself off the stronger and more addictive oxycontin.

My question is this: if I can get ahold of this powerful drug just by asking my doctor for it, why is it that something that is far less addictive and harmful to me is not legal??? It would make me a criminal and give the authorities the right to put me in jail if I were to smoke pot for pain.