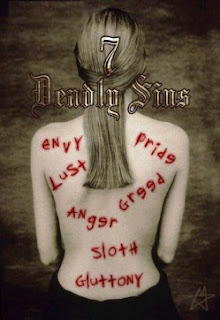 Do you know what the seven deadly sins are? And why they are called that? I didn't, but as I was thinking about my New Year's Resolutions, I wondered about them. I found out some interesting facts on the Wikipedia page, and I thought maybe it would help some other people think about their own resolutions.

First of all, the whole idea of these particular sins started way back during early Christianity, and beginning in the early 14th Century, the Church hierarchy figured it was a good way to teach the common people about how to live a life of grace. They have also morphed quite a bit over the ages. In the Book of Proverbs, it is stated that the Lord regards "six things that he hateth, and the seventh his soul detesteth." They are:
Now if you look at the seven sins that are listed on the back of the woman above, you can see that they are different, and the only one being the same is pride (haughty eyes). These sins all keep you from finding serenity, and I'm sure that the sin of pride has earned the right to be known as the one that goes before a fall.

Pride is the one that has been my downfall, for what seems like forever. I know that any time I begin to think I am better than somebody else, my heart hardens towards that person. It's no wonder that humility, one of the Seven Virtues, is also impossible to develop if you are filled with pride. Sometimes I wonder if I was born just to learn humility, as many times as I've been shown the error of my ways.

My New Year's Resolution for 2010: I will learn to be humble without being humiliated. That's probably enough for a decade, don't you think?
:-)
Posted by DJan at 12:40 PM