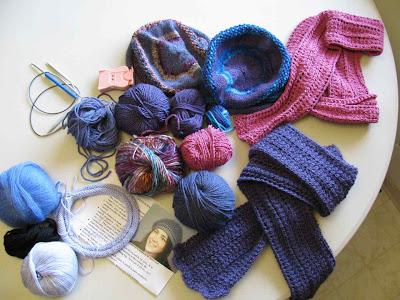 One thing about being retired and not going to work any more is that I can choose what I want to do with each day. Thing is, what might that be? Obviously, lately that has involved knitting. Just look at this array! First it was a scarf (the purple one), and I liked it so much I made another (the pink one, same pattern but longer this time), and then a hat (the purple and blue one), and I liked that one so much I made another (to the left of the first hat).

And now I'm knitting one for a present, since the second hat is too small for my friend's head. (It was originally going to be her Christmas present.) This new one is more like a true toque, with lots of room for her voluminous hair. Now if I like this one as much as I think I will, I may be forced to make even more of them. You can never have too many hats, right? And then there's those homeless people who always need them. 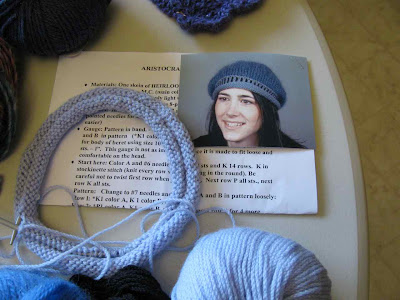 This hat uses three different colors and also has that roll-up brim (see the beginning of it here). You can enlarge any picture if you want to see all the details. The biggest problem for me in knitting in the round is that I have to pay attention to the end of the row, since I am following the pattern according to numbers of completed rows. I've gotten around that with two nifty helpers: markers that tell me when I've come back to the beginning, and a row counter! (My new row counter is that pink plastic thing in the first picture.) That way when I finish a row (by slipping the marker onto the other needle), I just reach over and hit the top of the counter and it gives me a new consecutive number.

The only other problem I have with hats is that they get finished way too quickly, and then I'm forced to sit around and twiddle my thumbs until I get a new pattern. Right now, as you can see, I'm ending up with lots of extra yarn that might force me to make up my own patterns. This appeals to me, because who knows? I might end up making fantastic hats that are sought after all over Bellingham! Well, maybe.

So this senior (me) is free to play with her yarn, her birdies, and look with great anticipation into the near future to see what it might bring. I get lots of ideas from my bloggy-klatch buddies as I sip my coffee. Oh yes, I also wanted to say thank you to my dear sister for having become a follower and actually making comments now and then. Who knows, Norma Jean, you may be moved to become a blogger yourself! But I won't hold my breath.
:-)
Posted by DJan at 1:03 PM