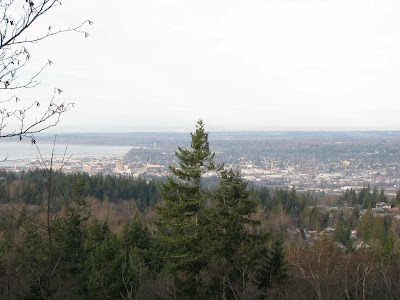 Today, eight Seniors showed up for a sunny Christmas Eve hike on Galbraith Mountain, which is the common name by which North Lookout Mountain is known. This open space privately owned multiple use land is nestled between Bellingham to the west and Lake Whatcom to the east. There are views of Bellingham Bay, the San Juan Islands, and Mt. Baker. There are bridges and sometimes logs over frequent streams. Click any picture to enlarge. 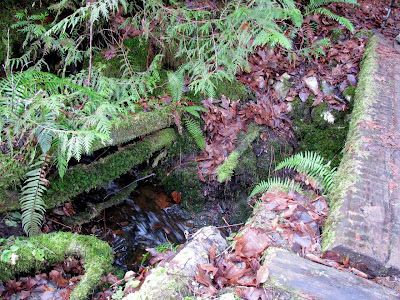 The many miles of mountain trails (40, to be exact) are used and maintained by a mountain bike coalition known as WHIMPs. (I finally found that it stands for WHatcom Independent Mountain Pedalers! They even have their own website here.) This mountain is covered with logging roads and, today, trails that extend for miles and miles. Most of them have names like "Cheech and Chong's Wild Ride," "Shawn's Aneurism," or "Woopsie Woodle" with ramps and drop-offs to scare even the most experienced mountain biker. It's also a nice place for hiking (which is what we did) or trail running. It is world renowned as a primo place to mountain bike. The owner of the land, Trillium, has installed several sculptures at various places on the mountain, which are great landmarks. Here is the group standing in front of what is known as the leggo blocks. 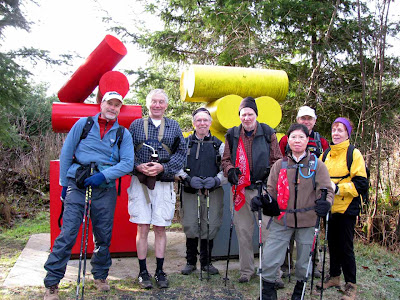 It was such a nice day, and we shared the trails with other hikers, runners, lots of people on mountain bikes (although not as many as I would have expected; it must have been because it was Christmas Eve and people had other things going on). We hiked just under eight miles and up (and down) just over 1,000 feet in elevation. And in this last picture, I'm standing in front of another sculpture, wearing Judy's new hat (see yesterday's post: I finished it!). It was a wonderful day and a fine way to spend Christmas Eve Day. Now I get to spend the evening and tomorrow with Smart Guy. 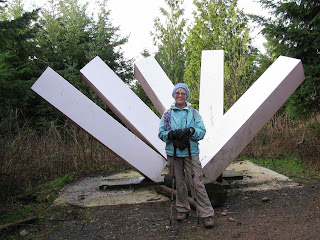