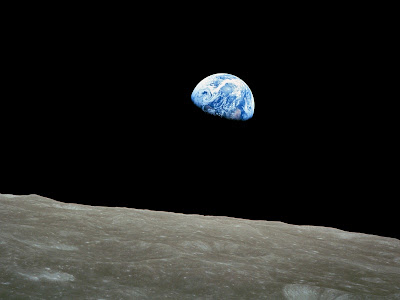 This picture of the Earth was taken in December 1968. As the Apollo 8 command module rounded the far side of the Moon, the crew could look toward the lunar horizon and see the Earth appear to rise, due to their spacecraft's orbital motion. Their perspective of the Earth, I am sure, was one they would never forget.

Our problems always look different when we look at them from a different perspective. On that globe in the sky are billions of people, fighting wars and making love, being born and dying. That fragile little planet hanging there in the sky is all we have. It is a beautiful gift.

I began thinking about perspective when I read a post at Recollections of a Vagabonde about her having been in Paris this past Armistice Day, November 11. When she returned to the States, she got sick and spent the time reading some books about World War I, what is called "The Great War." I didn't realize how many millions of people died during that war until I read this post. I knew Veterans Day, as it is called in the US, was to commemorate the end of this war, but I learned a great deal when I read her well researched article.

Even though the population of the Earth was much smaller at the beginning of the last century than it is today, 40 million were dead or injured in the four years this war was waged. When I think of the conflicts going on in the world now, they pale against this number. The fact that I know about every major war in the world today, every newsworthy death that the media finds to tell me about, near and far, distorts my perspective of what is happening in the world. And the media also distorts my perspective because it doesn't focus on the positive, but only on the negative. Rarely do I read any stories anywhere that tell of the magnificent, courageous and meaningful things that humanity is also accomplishing every single day.

When I visit Astronomy Picture of the Day, my perspective begins to change, placing my problems and the world's problems into a different perspective. I can then lift my head, breathe a little easier, and feel my natural optimism begin to return. Then I walk over to my iMac, turn it on, and read all the wonderful things my blogging friends have to say.

I read about my friends all over the world: in India, the Philippines, Scotland, Ireland, Britain, Canada, and all the regions of the United States. They write funny and profound stories, show me pictures of their lives, talk about their concerns and their children, grandchildren, illnesses, fears and coping strategies. I am uplifted and energized, ready to start my day with a positive attitude, with a perspective of hope.
:-)
Posted by DJan at 6:52 AM