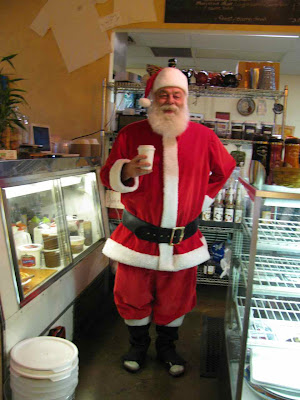 Yesterday my friend Gene dressed up as Santa and came to the coffee shop. When I walked in, he had had all the kids sitting on his lap, taking pictures with his own camera held at arm's length. I had to get this one (he's behind the counter here) showing that under those spats he's wearing his usual Birkenstocks. Gene is a fisherman who generously gave us our Thanksgiving salmon for the past two years. He left his usual companion at home, a 20-year-old parrot he calls Poopstain (for obvious reasons).  The small coffee shop is locally owned; Gene says Starbucks doesn't let him bring the parrot in. 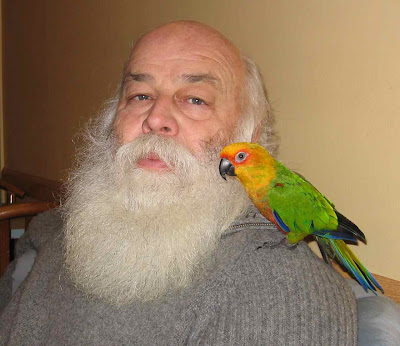 I've seen the parrot get his attention by pulling on his beard to make him turn toward him. Poopers also drinks water and takes nuts from Gene's mouth. I talked Gene into taking the bird to a vet not long ago, and it turns out he's still a very healthy bird with maybe another five years of life. I thought you might enjoy seeing some of our local color. 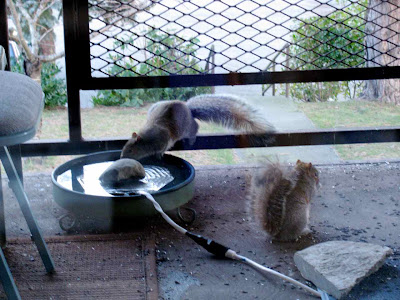 My birdbath is getting more popular with the regulars. Yesterday I saw this scene on the front porch, and just while I was writing this, some jays flew up to partake. I've learned that when it's cold the squirrels use their tails to keep warm, which is why the one eating has it wrapped up over his spine. I've learned so much from my blogging friends!

In a few minutes I'll be heading down to the Farmers' Market, which is only open today and next Saturday, and then it will close for the season and re-open in April with the mayor tossing out the first cabbage, just like last year. I'll be there hoping for good weather. The gorgeous sunny weather is now behind us, and we've got snow coming tomorrow, and then rain for the rest of the week. When the rain returns, it will bring more moderate temperatures. That Rex block was sure nice while it lasted, but I actually look forward to the return of the usual situation here in this part of the world: rain, mist, temperatures above freezing.
:-)
Posted by DJan at 9:00 AM