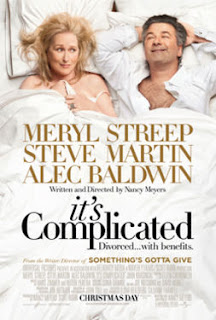 Last night Judy and I went to see "It's Complicated," with Meryl Streep, Alec Baldwin, and Steve Martin. It was definitely a "chick flick" so I went over to Rotten Tomatoes to see what its "freshness" rating is over there. (The link takes you to that page.) Surprisingly, to me, it only has a 50% freshness rating. The way this website works is a positive review gets a fresh tomato, and a negative review gets a splat.

First of all, I will see ANYTHING that Meryl is in, and I have never seen a Nancy Meyers film (she wrote and directed this) that I didn't like. Any woman of a certain age will appreciate the humor in this movie. It's not often that we get to see the older woman pursued by the men in the movie (think "Something's Gotta Give," another Meyers movie). Alec Baldwin was really good as Jane's ex-husband. I read two reviews that pretty much say what I felt about the movie, and one of them is even written by a man. The first is by Lisa Kennedy at the Denver Post. She ends her post with this quote:


Sure, "Up in the Air" is the more ambitiously modern comedy. But this often hysterical romp has a Hollywood Golden Era ease. Simply put, "It's Complicated" is a hoot. Who among us cannot not appreciate that?

Maybe the men who are being made fun of, like the Jakes of the world? My favorite review was written by James Berardinelli over at Reelviews. If you spend much time over at Rotten Tomatoes reading the reviews, you'll see that most guys and quite a few women reviewers felt the movie was too cutesy and not indicative of the real world. Hello? I wanted to see a movie with a scene like this one:


Perhaps no other working director can get as much humor out of the naked human body. Meyers provoked big laughs when Diane Keaton disrobed in Something's Gotta Give. Here, it's Alec Baldwin's turn. The scene is so hilarious that you won't hear a line of dialogue - the rest of the audience will be laughing too loudly. It's Complicated features something increasingly rare in romantic comedies: most of the jokes work. They're funny. And you won't feel embarrassed for having laughed at them because you won't be the only one in the theater doing so.


Yep, this movie kept us both laughing and appreciating the actors. Steve Martin was superb as he underplayed his character. By the end of the movie, I was rooting for him to win Jane's affection, but the movie will keep you guessing till the end. If you see it, I'd love to know what you thought about it. Next up: Judy and I will go to see "Up In the Air" on Saturday!
:-)