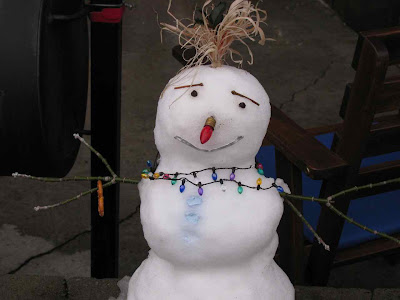 When the twentieth century began, that first decade from 1900-09 was known as the "aughts" as in 30-aught-6 (the only place I ever heard it, some type of gun). Oh, and about that snowman: I saw him while in Leavenworth, and he looked to me like he was sadly saying goodbye. That's the only reason for his picture here.

I went looking on the internet for the name of the decade we are just now leaving, to see if anybody had ever come up with a name for these years with zeros. It was so helpful to all the New Years Eve revelers who wanted to have glasses made out of those zeroes. I would put a picture up but I think I'm glad to see the last of those. There never did seem to be a name for this decade. People are beginning to notice, as they try to decide what to call it. I did find this really cool blogger who writes for the Buffalo News, Anne Neville, and give you a quote from her blog (although the above link gives you the whole post if you are interested):


As the millennium dawned, nobody had an iPod or an iPhone, much less an app. Google, YouTube and blogs were all nonsense words. Texting was unknown; we communicated instantly via IMs while sitting at our computers. Twitter was something a bird might do, not a person. If you bought something on eBay, you paid with a money order -- no PayPal. Imagine life without Facebook -- some 300 million people worldwide can't.


It amazed me to realize the truth of all that: in 2000, our blogosphere was just being born. My mind is boggled at how much the world can change in the space of ten years, and it can't help but make me wonder about ten years from now. Anybody who says they can tell us is either misguided or ready for the loony bin.

Not to mention where I will be. Hopefully, like Abe Lincoln (a favorite blogger) over at Pick a Peck of Pixels, I might still be plugging along at 77. I just can't even imagine what the world of 2020 will be like, but it's fun to think about it. Change does seem to be accelerating in speed as I begin to walk more and more slowly. But at least I'm still walking!
:-)
Posted by DJan at 8:48 AM