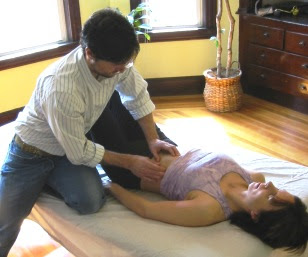 Picture from The Rolf Studio
In my other blog I mentioned in passing that I had been Rolfed, and my brother Buz asked me in a comment if I gained any height. And Star had never heard of Rolfing Structural Integration, so here's a brief explanation and some links I found.

First of all, if you have ever received a professional massage (I get one every three weeks), you are familiar with the height and shape of the massage table: wide enough for one person to lay comfortably on it, and a little more than waist high, so the massage therapist can put strength behind her strokes, and it's easy for anybody to climb up on it. The Rolfing table is half as high and twice as wide, because the Rolfer gets on the table with you. And instead of being naked and covered with a sheet, you wear at least your underwear so that the Rolfer can work on you and see what to do. You get off the table often and walk around during the session. No oil is used.

The name comes from the woman who invented it, Ida Rolf. The main Rolf Institute is located in Boulder, and I looked through my old journals and found when I went through it. Usually a person pays at least $100 a session, and ten initial Rolfing sessions are usually performed.

Since I lived in Boulder, I was able to sign up as a model in 1984 and be used to train new Rolfers. All of the trainees are closely monitored by the expert Rolfers, so in effect you get to be Rolfed by a beginner but examined by lots of experts, and you pay much less. I paid (in 1984) $300 for ten sessions, and the schedule was twice a week instead of once a week. Usually at least a week needs to pass between sessions, but these people were being trained. Robin was my trainee. I found this entry in my journal, dated August 1, 1984:


The Rolfing is finished! I am really amazed at the difference in my body in the five weeks since Robin and I began the process of becoming Rolfer and Rolfee. See the next page [two pictures of me in my underwear which I am not going to show you!]: it's not as obvious in these two series that the length I have gained is mainly in my torso, but you can see it if you study the elbow placement and the smoother lines in the right-hand torso. My head is also back rather than forward as it was before. So I am pleased I am now 5'5" tall, which is taller than I've ever been. I feel much more integrated in my body now, and the Rolfing should continue to change my body for another seven months.

I also found some other earlier entries where I complained mightily about the pain. It does hurt, and the Rolfer uses her elbow, hard pressure, and her fingers to shape the fascia underneath the skin. I found a link to a woman's page who went through it to help her overcome past injuries. I gained almost two inches in height at the age of 43, and I kept it for several years.

As the years wear on, the effects of gravity begin to pull you back down. (I'm back to 5'3".) I went through two series of five to gain back the height, and a couple of sessions of three. Although it's been at least five years since I had any Rolfing at all, I learned so much about how to move around from my core. Sometimes on the street I'll see somebody and unconsciously think how much Rolfing could improve them. Almost every city has some Rolfers, if you decide to give it a try and spend a fair amount of money!
:-)
Posted by DJan at 10:44 AM