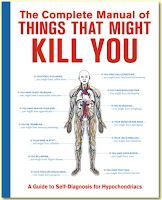 I already covered my issues with OCD, so I thought I'd move on to something just as much fun: hypochondria (or hypochondriasis, as it's also called). This disorder is characterized like this (of course by Wikipedia):


Hypochondria is often characterized by fears that minor bodily symptoms may indicate a serious illness, constant self-examination and self-diagnosis, and a preoccupation with one's body. ... Some hypochondriacal individuals are completely avoidant of any reminder of illness, whereas others are frequent visitors of doctors’ offices. Other hypochondriacs will never speak about their terror, convinced that their fear of having a serious illness will not be taken seriously by those in whom they confide.

Although I don't have the above symptoms to a noticeable degree, I do detect any differences in my body from day to day, and sometimes I really worry about having a disease and that I should be doing something about it by going to the doctor. But the truth of it is this: none of us are going to survive forever, and something is going to get you eventually. So I have a real dilemma: am I being a hypochondriac by worrying about these things, or negligent?

Both of my parents died in their sixties, both from the same cause: heart disease, or what is also known as coronary artery disease. They didn't have statin drugs available to them, or I think they might have survived longer, but for sure they wouldn't be alive today because, well, they didn't pick their parents carefully. Another interesting quote from Wikipedia:


It is common for serious illnesses or deaths of family members or friends to trigger hypochondria in certain individuals. Similarly, when approaching the age of a parent's premature death from disease, many otherwise healthy, happy individuals fall prey to hypochondria. These individuals believe they are suffering from the same disease that caused their parent's death, sometimes causing panic attacks with corresponding symptoms.

My constant habit of exercise and taking statins do, I believe, cut the possibility of developing heart disease prematurely, but then I think: what do I want to keel over from? Uh-oh, my OCD is kicking in, I'd better stop now! But not before I share this perfect (for me) cartoon from the web: 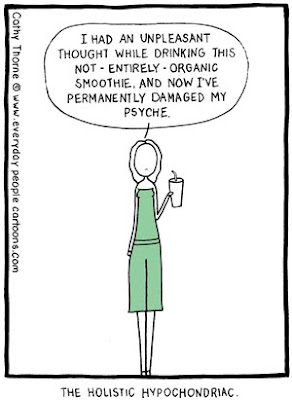