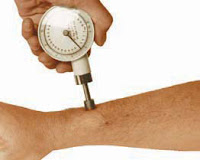 Did you know everyone has a different pain threshold? They can measure it with a dolorimeter, which shows when you begin to feel pain. Everyone is different. I used to think I have a high pain threshold, because I've had a fair amount of it and think I must be used to it. This, however, is known as your pain tolerance, and you don't get more used to it the more you have it. Wikipedia tells me this:


It is widely believed that regular exposure to painful stimuli will increase pain tolerance - i.e. increase the ability of the individual to handle pain by becoming more conditioned to it. However, this is not true: the greater exposure to pain will result in more painful future exposures. Repeated exposure bombards pain synapses with repetitive input, increasing their responsiveness to later stimuli, through a process similar to learning. Therefore, although the individual may learn cognitive methods of coping with pain, these methods may not be sufficient to cope with the boosted response to future painful stimuli.

I know that I've had quite a few accidents and operations in my lifetime, and I don't like to use even tylenol or ibuprofin to mask pain. But this is also because I've discovered that I just keep going and hurt myself if I don't feel the pain. Just ask Smart Guy.

When I broke my pelvis in six places and shattered my sacrum in 2000, I was laid up for several months. After waking up from an operation with an external fixator drilled into my hipbones, I learned what pain could really feel like. I wrote about the incident here.

But that's not the reason for this post. I wonder about pain medication. As I was recovering, I discovered that the doctors had put me on oxycontin, which is a nasty drug to kick. The doctors were no help at all, either. (This was before it was a street drug.) They just told me to cut the pill in half, which I found out, by looking it up, would release the entire dose all at once!

Getting free of that drug required me to deal with the feeling of ants crawling under my skin, day after day. I weaned myself off by using percocet, which is also addicting but I could stop it once the pain of the addiction began to wane. I think I must have a high pain threshold because I keep doing things that push my limits.

I am always in some pain: either from the nerve damage down my right leg, or sore knees, or my rotator cuffs, both of which send signals down my arms now and then. The problem with pain medication is that you continue to need more of it to get the same effect. So, I live with it. What do YOU do to deal with pain? Or is your pain threshold so high you don't feel any?
:-}
Posted by DJan at 2:39 PM