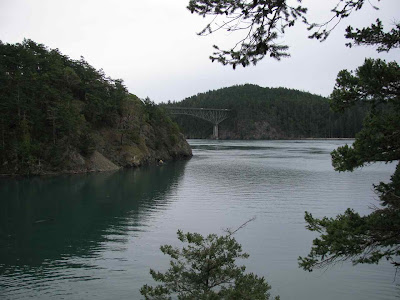 Today, 17 Senior Trailblazers headed south of Bellingham to Skagit County's Deception Pass State Park. We had a 20% chance of rain, but instead of rain we had clouds, full overcast, all day long. This made for some dramatic pictures, though, as you will see here (click to enlarge). The entire hike ended up being a little more than 8 miles and, although we never got more than 700 feet above sea level, went UP and DOWN for a total elevation gain of 1,500 feet. No wonder I'm tired. The above picture shows Deception Pass Bridge  that joins Whidbey Island to Fidalgo Island. From a travel agency's website:


In the spring of 1792, Joseph Whidbey, master of the HMS Discovery and Captain Vancouver's chief navigator, sailed through the narrow passage that is now called Deception Pass and proved that it was not really a small bay as charted by the Spaniards (hence the name "Deception"), but a deep and turbulent channel that connects the Strait of Juan de Fuca with the Saratoga Passage.

While we were there today, it was smooth as glass, no turbulence at all. First, we headed up past Pass Lake, a fairly large freshwater lake, to an old abandoned orchard. Once we got there, we saw an old tree with a couple of makeshift swings in it. Mike was willing to swing on the tree so I could snap his picture. We all know Mike is still a kid at heart. 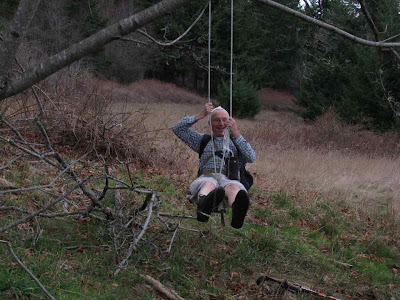 Next, we headed over to Lighthouse Point for lunch, it being near noon and all, which showed us some of the miles and miles of the State Park's shoreline. We walked along this lovely beach to reach the point on the other side of these trees. 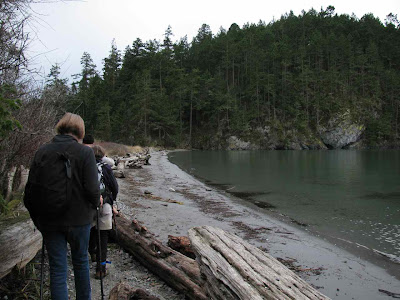 Although there was no lighthouse at Lighthouse Point (only a small beacon), we found this beautiful spot for us to have a nice lunch. We looked out over Bowman Bay, watching seals (which I was unable to capture with my camera), birds, and humans in boats. The only annoyance of the entire day was the jet flights from the nearby naval base, which made me wish I had my earplugs! 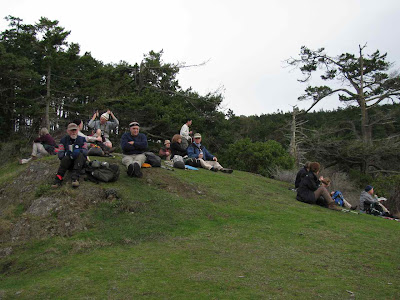 After lunch, we headed back to the Bowman Bay parking lot and stashed our packs while we walked another mile or so to Rosario Point. By this time the clouds had begun to lift over the Olympic Mountains across the water, and I saw this low cloudbank light up, with the mountains behind, and I could not believe my luck. Hopefully you will see how gorgeous this shot is, if you enlarge it. 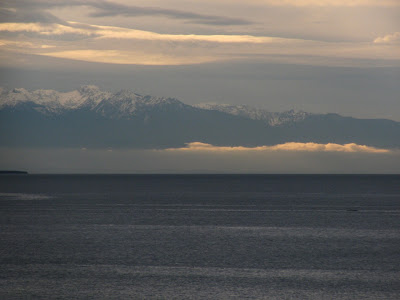 This area is now known as part of the Salish Sea, which I wrote about a while back here, if you're interested in a little more information about this area. (There are maps and information about why it's called that.) Tired and happy, we piled into our cars and headed home, and I walked in the door, kissed Smart Guy, and started this post. Now I can have that wine! Thanks for coming along with me to Deception Pass. 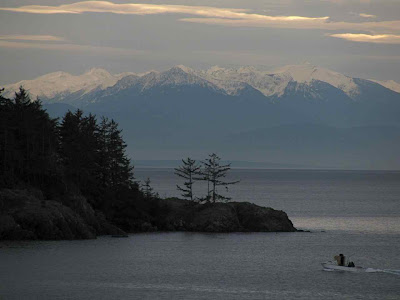