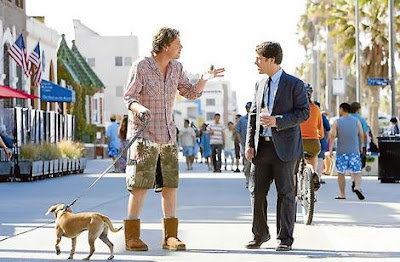 I subscribe to Netflix, which is a great way to see movies these days. I spent some time looking at different "best of" lists, which give me ideas for movies I might want to rent. Even though Netflix itself does a good job of finding movies I might like, it's nice to get ideas from other sources. I saw the movie "I Love You, Man" on a couple of lists, and since it's a comedy, I put it on my Netflix queue.

Although I had also decided to watch "Little Dorrit," a series from PBS's Masterpiece Theater that is also available on Netflix, somehow or other I got sent the DVD for the comedy because I didn't pay close enough attention when arranging my queue. Disgusted with myself, I decided I'd better just get it over with and watch the darn movie.

Well, I loved it. It's what is known as a "bromance" (combination of "bro" and "romance"), which is defined as a non-sexual close relationship between two men. A sort of man-crush, if you will. Although the movie stars Paul Rudd and Jason Segel, I had never seen either of them before. The movie's premise is that Peter (Rudd) proposes to his girl friend and while they are planning the wedding, it occurs to him that he's never formed any close male friendships and has nobody to stand up for him at the wedding. So he starts going on a series of "man-dates" that are disastrous, although pretty funny. Then he meets Sydney (Segel), in many ways a rather disgusting guy, but they hit it off. The premise of the movie sets up a way for these two actors to show how funny they can be.

I smiled a lot while I watched it, laughed out loud a couple of times, and if you can stand a fair bit of sexual innuendo (some not so subtle), I think you might enjoy it as much as I did. Not a great movie but actually quite a good diversion. Now back to Little Dorrit.
:-)
Posted by DJan at 1:57 PM