A friend of mine invited me along on a field trip to visit the Pacific Northwest raptor country, headed up by raptor biologist Bud Anderson. He took us out for the day to learn about the raptors that populate the area. Was I ever surprised at how many of them there are! We saw three different kinds of merlin falcons, bald eagles (which were so numerous that they were ho-hum), red-tailed hawks, rough-legged hawks, peregrine falcons, kestrels, harriers, and even a short-eared owl, all hunting for prey. We also saw trumpeter and tundra swans, and the beautiful little dunlin sandpipers that swim through the air in swirling clouds, wingtip to wingtip. 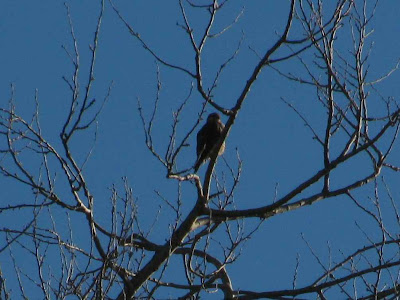 The day's first sighting was of a Merlin falcon in this tree. Bud said it is a kind rarely seen on this side of the mountains. I know so little about these birds, but I learned that they are very fast, smaller than the  Peregrine falcon, and can snatch birds in midair. After a while I could see the difference in the way they fly (at least as compared to more common birds). 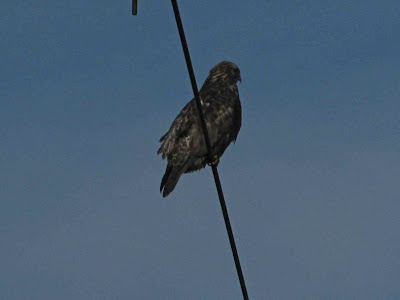 Next we saw this hawk, or is it a Peregrine falcon (I am not sure now, I had so much information coming at me all day long). We were looking at them through our binoculars most of the time, but occasionally they would stay in a place long enough for one of the birders to set up a scope so we could watch them for a long time. Occasionally I was able to get these pictures with my telephoto lens. 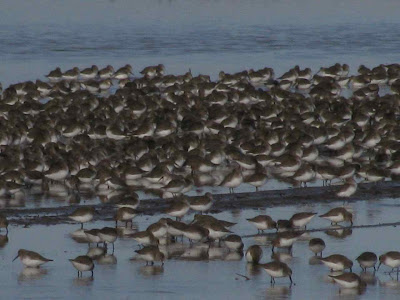 We headed to an area with lots of dunlin, and we watched the way they avoid falcons by flying in vast clouds. There are literally thousands of them all flying together, and they are impressive to watch. I learned that the weak or slow ones don't last long, because they are picked off if they vary even a little from the others. 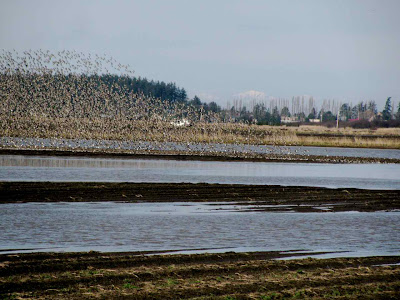 And then the final excitement of the day: Bud had a little cage with a starling in it, and filament on the top, which he placed in the road after locating a red-tailed hawk. He was able to capture it in order to catalog, weigh her, and place a band on her leg. Here she is after Bud freed her from the filament (click to enlarge). 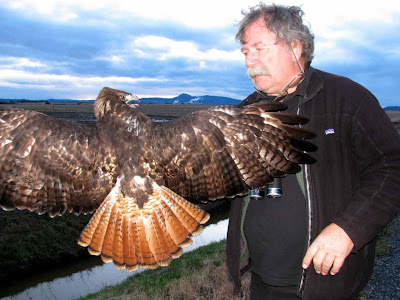 He said the larger ones are always female, and this one weighed 1400 grams, or almost three and a half pounds! Look at that beautiful tail, and those wings. He said she was born not last summer but the summer before that. 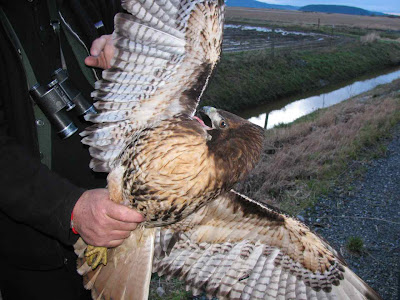 Then after putting a hood on her and wrapping her up, he placed a band on her leg. 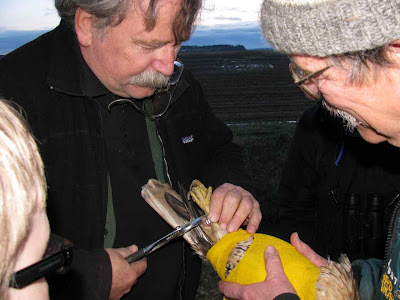 After each of us had a chance to hold her and feel her heart beating under that yellow bondage, he removed everything (except the band, of course) and let her go. She flew off, none the worse for wear, and all of us not only learned how wonderful these red-tailed hawks are, but had a chance to be a part of this incredible experience. We came home from this wonderful day filled with wonder and gratitude for having the chance to do this. Thanks, Bud! Thanks to Cindy for inviting me!