Up In the Air 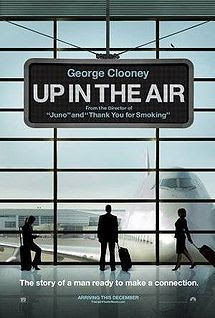 I just got home from seeing "Up In the Air" with George Clooney. The first thing I want to say is it is not a comedy. There's nothing funny about the whole movie, but it's an excellent examination of the place that our relationships play in our lives. (Rotten Tomatoes gives it an 89% freshness rating, with all the reviews available here.)

It is very well done. It depends on what you want from a movie, and when I left "It's Complicated," I was smiling and happy, like I'd just had a good glass of wine with a friend. When I walked out of this movie, I was sad. Just plain sad, because of the incredibly poignant way this movie has of showing the reality of today's economy, with so many people losing their livelihood.

The story is about Ryan Bingham, a man who travels around the country to various workplaces and conducts employee layoffs on behalf of bosses too cowardly to do it themselves. The firm he works for hires a young recent Cornell graduate, Natalie, who decides she has a way to make even more money for the company: by firing people through video chat. Ryan takes her on the road to show her how he fires people, and she even fires some of them herself. I found that many of the people who were fired on screen were actual people who lost their jobs. From Wikipedia:


While shooting the film in St. Louis and Detroit, Reitman [the director] placed an ad in the paper asking if people who recently lost their job wanted to be in a documentary about job loss. He specified "documentary" in the ad so actors who wanted to be in the production would not answer the ad. Reitman was amazed by how many people of different age, race, and gender were willing to speak frankly about what happened and what a cathartic experience it was for these people. They received a startling amount of responses with 100 responses, 60 people on camera (30 in Detroit and 30 in St. Louis).


These people were not acting. They were telling their stories, and they are profoundly affecting. Even though the movie is about relationships, it goes about it by telling you what Ryan's life is like when he doesn't want any "baggage," i.e., relationships, ties, or family.

Go see the movie, but I was expecting a comedy, and it's not. It will make you look at your relationships with renewed appreciation, and it will break your heart that these real people are going through such pain and suffering. It's not like I haven't suffered through this past year, but nothing like these people. I was already retired when the recession hit in full force, and the job I had had for thirty years was no more, just a few months after I left. We don't have as much income, but we have enough for our modest needs.

Clooney deserves an Oscar for his portrayal of Ryan Bingham, and the supporting actors, Anna Kendrick as Natalie, and Vera Farmiga who plays the female version of Ryan, are all first rate. I'd love to know what you think of it, if you go to see it.
:-}
Posted by DJan at 4:10 PM