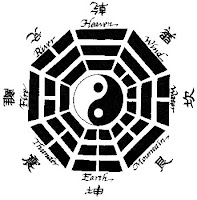 Well, now I've done it. I started re-reading my journals that I kept during the 1980s, and I have remembered something I never use any more, but for two decades I wouldn't make a move without consulting it: The I Ching, or Book of Changes, an ancient Chinese text used to guide the user to understand the present moment and give an idea of how to proceed correctly to the next moment in time. It has been used in one form or another for 5,000 years.

The way it works is that you have somehow to produce six lines, working from the bottom to the top to build a hexagram, which is made up of two trigrams, which are one of these eight here in this diagram.

As an unrepentant hippie, I learned to use this method of divination during those years, using sixteen stones to find my hexagram, and thereby tell me where I was at and where I was going. Seven stones were white, five were orange, three were grey, and one was a bloodstone. I would draw out six stones. If I drew a white or orange stone, it would mean it wouldn't change, but if I drew a grey or the bloodstone, it would change to its opposite, so you end up with two hexagrams, one for the present and one for the future, with moving lines.

Well, I've explained enough of how it works, I think, for my readers. What I wanted to tell you about is how much I followed this method of divination and that I believed in it implicitly. It is not an exaggeration to say I never made a move without consulting the I Ching for guidance. Once I got my hexagram, I needed to interpret it, and I used the Wilhelm/Baynes book to tell me what the ancient Chinese text meant. Usually it was pretty esoteric, but really you had good and bad things come from it, much like (I guess, knowing nothing about it) the Tarot deck.

The one thing I remember is how I needed to formulate my question and find a place of peace and quiet. The whole thing took hours, first to gain a contemplative mind, and then to "throw" the hexagrams, and finally to interpret them. In many ways I now realize that I needed to cultivate a prayerful attitude in order to approach the I Ching. Just for fun, I opened it to a page and took a picture of it, so you can see how esoteric the words of the book are (click to enlarge). That's my handwriting saying "The Ultimate Answer," whatever I meant by that. 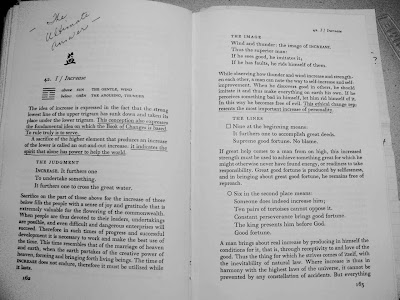 Over the years I have lost the stones, but I still have my old book, which I have carried around with me, much used and with so many passages underlined and filled with old memories of hopes and dreams I don't remember any more. I doubt I will ever use it again, but I wouldn't even consider not having the I Ching in my house... just in case.
:-)
Posted by DJan at 4:02 PM