I'm on the last chapter of a book I've enjoyed a great deal: If I Live to be 100, published in 2002 by Neenah Ellis. She was formerly a staff producer for National Public Radio's All Things Considered and is now a freelance reporter and producer. The link above will take you to a short description of the book and of each of the centenarians she interviewed.

In 1997, Neenah got a grant from the Corporation for Public Broadcasting to do a radio series about the twentieth century. She decided to talk to centenarians and ask them about their lives, which would encompass the entire century. In 2000, she did a series on NPR's Morning Edition based on these interviews. And then she wrote the book for those of us who missed the radio show. Most of the people in the book lived alone or in assisted living, but all of the ones she interviewed, even one at the age of 117, are all "there" upstairs. I think now, in 2010, I can assume that all of them (okay, most) have moved on.

I don't know about you, but one of the scariest parts of facing old age is this: dementia, Alzheimer's, the loss of cognitive ability. I already feel this at 67. Forgetting names, having a word on the tip of my tongue but not being able to access it, these little annoyances are now part of my everyday existence. But these centenarians give me hope that a long life does not necessarily equate with madness.

I remember long ago hearing a quote from George Orwell: "At age 50, every man has 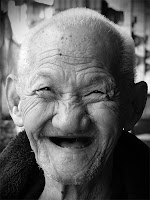 the face he deserves." Well, what about at 100? If you live that long with all your faculties, your face, man or woman, has a sameness about it. Of course there are wrinkles and no teeth (or a whole lot fewer teeth), because I don't think the human body is designed to last much longer than 80, or (at most) 90 years, but gender differences seem also to have moved into the past.

In reading the book, one thing kept jumping out at me: how every single one of these centenarians has learned to live for the moment, and most of them are truly happy individuals, even with all the physical ills they deal with. Two of these centenarians are married to each other, Sadie and Gilbert Hill. A quote from the book (p. 103):


The researchers at the New England Centenarian Study say the odds of a married couple both making it to one hundred are six million to one. Sadie and Gilbert are maddeningly nonchalant about their incredible feat. "It just kind of caught us standing still," says Gilbert.


They live alone, do all their cooking and shopping together. Neither of my parents made it out of their sixties. I guess it's true that picking your parents is the best way to ensure a long life. Until I read this book, I was just not sure I even wanted to live that long. So for now, I'll try to eat right, keep exercising, and hope for the best. Will I still be blogging at 100?
:-)
Posted by DJan at 11:50 AM