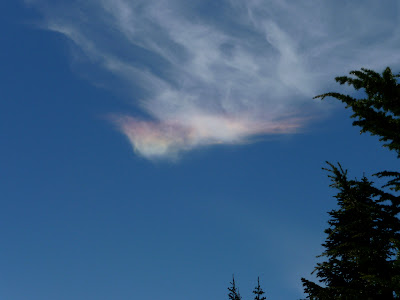 The Retired One has a mishmash of pictures on her site today, and I decided to do the same thing. The first one is the cloud shot for Susan's The Sky's the Limit photo challenge on Ripples of Kindness. The sky here makes me think of flight (it looks a little bit like a rainbow bird). Click on any image to enlarge. Especially this next one: 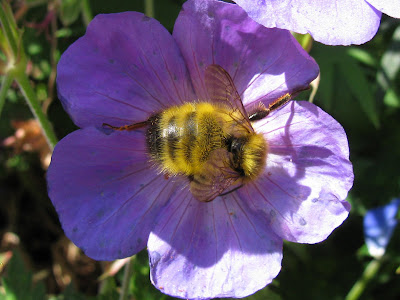 Today, just by chance I walked by the garden area at the grocery store, and I saw a bunch of bees buzzing around the flowers, and I quickly put my camera on macro and pointed it in the general direction of the bees. I got a few blurry ones, but with a digital camera you just keep on snappin' and delete the unsuccessful ones. In the closeup you can see the pollen on the bee's behind. 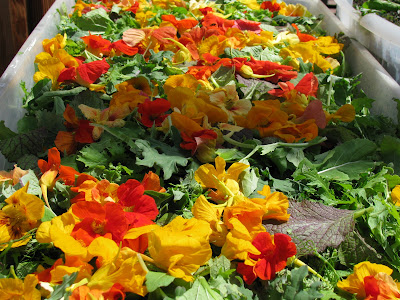 At the Farmers' Market I saw this delectable mixture of salad greens (and yellows and orange) that just made me smile. The shadow in the middle at first felt like a mistake, but it bisects the picture and gives it a bit of depth. 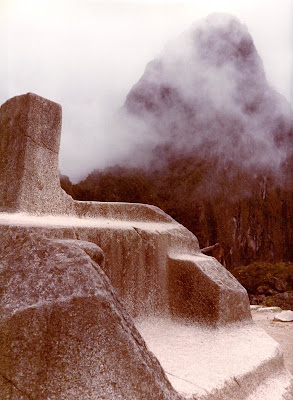 This scanned image was one I took in Machu Picchu in Peru (1981). It's a little bit faded, but the picture itself was pretty monochromatic. I thought I might like this picture best of any I've taken, but when I looked at it again, I'm not sure it would qualify for that honor. In the foreground is the "Hitching Post of the Sun" where the Incas made sacrifices to their gods, and in the background is Huayna Picchu, the mountain seen in all the pictures of Machu Picchu, which I climbed later on that day.

That's it for today. Tomorrow I'm going to talk about my skydiving accident, since my brother has asked me to. It happened in 2000 and I came as close to saying goodbye to life as I ever want to again, until it is my time to go.
:-)
Posted by DJan at 2:00 PM