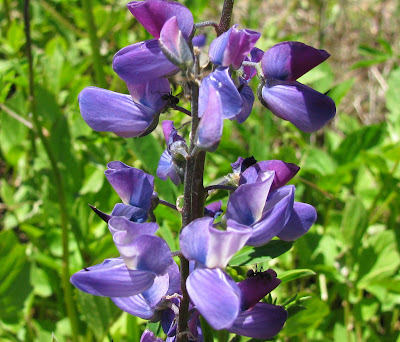 I spent this morning perusing my pictures from yesterday's hike again, gloating over my new camera's ability to make such gorgeous images. (Click to enlarge any of these pictures.) Inside this lupine, there are at least two ants doing their industrious ant thing (there are many flowers, like peonies, that are dependent on ants to open; maybe lupines are the same). I used the macro feature and actually cropped this picture in order to focus more on the ants. 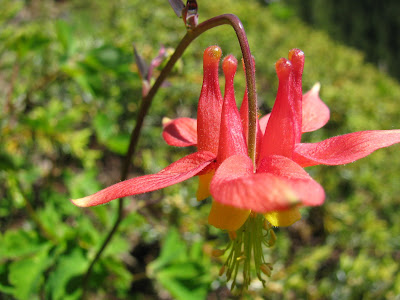 This columbine is also taken with me laying down in the trail and pointing the camera in the general vicinity of the flower. Fortunately, I was hanging back at the end of the hikers, along with Mike who was also snapping pictures, so I was in no danger of being run over by any overzealous Seniors. I only saw red columbines, but in Colorado they are usually purple or blue. 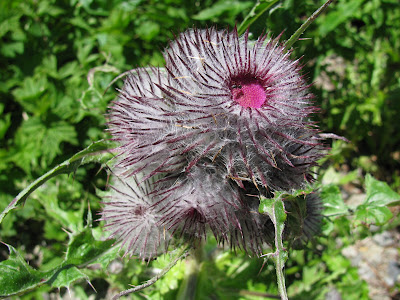 Speaking of ants, this thistle plant, which is just beginning to bloom, has an ant right in the middle. The thistle plant, down in the low country, is considered to be a weed, but up here they just brazenly and proudly show how beautiful they can be. These get full sun all day (whenever the sun is shining, which it obviously did all day long yesterday). 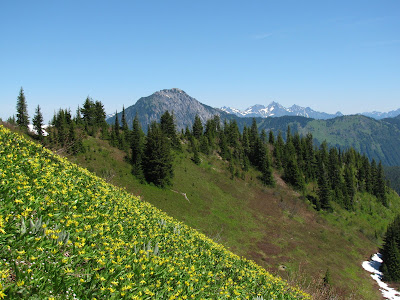 Glacier lilies in the foreground, Canadian mountains in the distance. A little snow in the right-hand corner, I'm telling you, Colorado (my old home state) doesn't have anything on the Pacific Northwest except a whole lotta altitude! 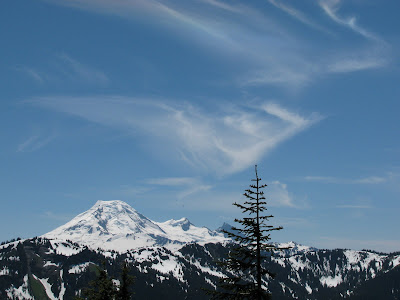 This is not a picture of flowers, but I am enchanted when I look at this picture and amazed at how it turned out. The largest mountain is Mt. Baker, accompanied by awesome sky, pine tree, snow, and a very happy photographer on the other side of the lens.
:-)
Posted by DJan at 11:47 AM