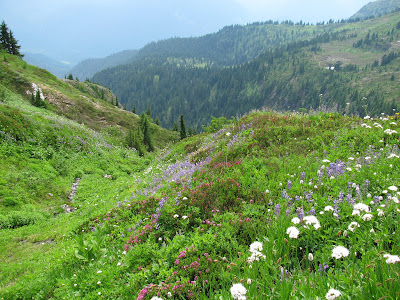 Well, Yellow Aster Butte is a beautiful place to be, especially on a hot day in the city (click to enlarge picture). It was warm, but not terribly hot, and of course we got to walk across snow fields again today. There were four words that described the Senior Trailblazers hike: sunny, buggy, wildflowers, hail.

Thirteen of us spent our Thursday on a seven- or eight-mile hike (depending on who you asked) and elevation gain of around 2,500 feet. We were immediately accosted by biting flies and mosquitoes as soon as we opened the door at the trailhead. Apply bug spray. Once we started hiking, the clouds of flies and mosquitoes only slowed a little when we moved briskly up the trail. Some of our enterprising hikers had screens to keep the bugs away. (I cannot seem to get blogger to download any of these pictures except the first one, but I'll keep trying.)

On the way back down, we had split into some hikers who wanted to make the ridge and others (like me) who were happy to mosey toward the top and take pictures of flowers. At 2:00 pm, I and six of my friends had begun the journey back down to the cars. The others were behind us somewhere, but they stayed together and we saw them at the end of the hike.

A spit of rain hit my arm. "Hey! I think it's beginning to rain!" I said, but the sky was still bright blue with just one distant dark cloud somewhere in the vicinity. Another large drop. It was beginning to rain, but since it had been so warm, nobody worried too much about it. More drops, but still lots of sun. And then... it happens in the high country: the large drops of rain changed into hail. First a little, then more, then stinging marble-sized hail. We took shelter for awhile, then as it seemed to lessen, began to head down the trail on round marbles. We got wet, we slipped and slid. The hail began again, and I could not see anything through my glasses. As we stopped again under a tree, I found a good spot to groan and lean hard on my trekking poles. Fred, next to me, groaned in what I thought was sympathy. Then he said, "your pole!" and I had been finding a nice secure place on what was actually the top of his foot! We all laughed hard at that one, but I have to say there was a little anxiety mixed into the whole scenario, since we were all soaking wet, an undetermined distance from safety, and in the middle of another hailstorm.

Finally wet to the bone, relieved, and all thirteen accounted for and at the trailhead... all's well that ends well. And this adventure was something we will talk about for a long time. It was a great day!
:-)
Posted by DJan at 6:36 PM