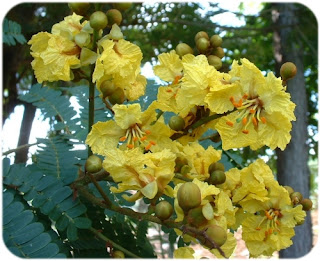 When I was busy composing my morning post over on my other blog, I started thinking about the time when I was a young girl in Puerto Rico. My father was stationed at Ramey Air Force Base when I was three, and I spent the next three years of my life playing and exploring in the tropical setting of Aguadilla, Puerto Rico. I must have played with the flowers of this tree, known as the yellow flamboyant tree (Peltophorum pterocarpum). I spent some time on line looking for a picture of the tree that I vaguely remembered. But the reason for the title is that of another memory.

Years later I returned to Puerto Rico when my then-husband Derald was stationed at that same air base. I was nineteen, and my son Chris was born there. We also lived in the town of Aquadilla, since it was the closest town to the air base. I had a stroller with my infant son in it and I was walking somewhere, now lost in the mists of time. A flower from an overhead tree wafted down in front of me, gently falling just out of reach. I stopped in the benevolent sunlight, picked up the flower and smelled it.

Suddenly, I was transported back to a time a decade and a half earlier. The smell of that flower caused me to remember what it was like to be a little girl again, with images and emotions flooding through me. This tree only grows in tropical areas, and I had not smelled that particular scent in all that time. This morning, I swear I could smell that flower again as I brought up the memories of us playing with the flowers, making bouquet and garlands of them, I imagine.

I found some really interesting information about scents and why they are so powerful, on Discovery Health on line:


A smell can bring on a flood of memories, influence people's moods and even affect their work performance. Because the olfactory bulb is part of the brain's limbic system, an area so closely associated with memory and feeling it's sometimes called the "emotional brain," smell can call up memories and powerful responses almost instantaneously. The olfactory bulb has intimate access to the amygdala, which processes emotion, and the hippocampus, which is responsible for associative learning. Despite the tight wiring, however, smells would not trigger memories if it weren't for conditioned responses. When you first smell a new scent, you link it to an event, a person, a thing or even a moment.

I really had no idea that the power of smell was so, well... powerful, but even today I can remember the emotions that I felt on that long-ago day when I picked up that flower. I also notice that several times I have looked at a picture posted by some blogging friend, and an emotion and a scent seem to waft through my mind. This happens often with roses, but the number of times I have stopped to smell the roses are too many to link to any particular memory.

Not at all like the yellow flamboyant tree, unique and very special in my memory, linked to a wonderful gentle time in my childhood and again another time as a young mother. It is a very special feeling to see a picture of that tree and be able to smell the flowers.
:-)
Posted by DJan at 12:24 PM